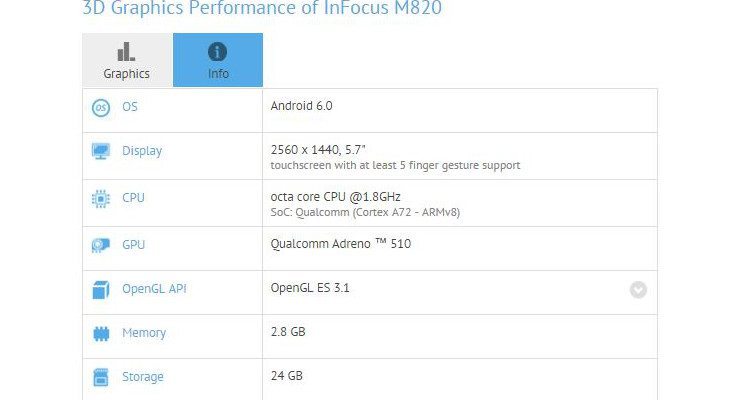 We expected to see a wealth of new smartphones leak before MWC, and we are not going to be disappointed. GFXbench has revealed the InFocus M820 specifications ahead of an official announcement, and it’s a smartphone to watch if you appreciate affordable power.

InFocus released the InFocus M810 last year, and we assumed we would see a follow-up to the device eventually. It appears our premonition was right as a smartphone called the InFocus M820 has gotten benchmarked over at GFXbench. The original was a phablet with a Snapdragon 801 and 2GB of RAM, and we’re pleased to say that the next generation significantly improves on those specifications.

The InFocus M820 looks to be in the Note range thanks to a 5.7-inch panel with a resolution of 2,560 x 1,440. A 1.8GHz octa-core Snapdragon 652 will power the show along with 3GB of RAM, and the storage is listed at 32GB out of the box. The cameras will also get an update with a 16MP rear camera and large 13MP front-facing sensor.

All the usual suspects appear to be present in the connectivity department, so you’ll get Bluetooth 4.1, Wi-Fi, A-GPS, 4G LTE and NFC. The listing says it only has a Single SIM, but we’re going to assume this as an error so you should see Dual SIM connectivity as well. Unfortunately, we don’t know the size of the battery, but it’s said to be fixed with quick charging. Last but not least, is the OS which is listed as Android 6.0.

The InFocus M820 is going to be a very solid follow-up to the M810 and while we expect the price to go up, it should remain cheaper than the flagships from top-tier manufacturers. There’s been no official word on the handset, but don’t be surprised if it’s released around or soon after MWC.