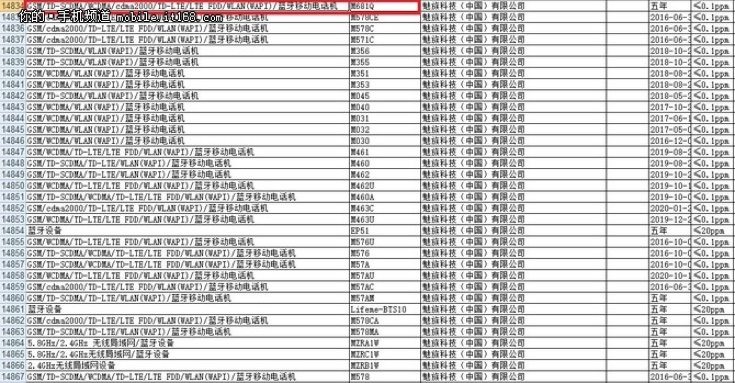 There’s plenty of anticipation for the successor to the Meizu MX5, and now there has been a Meizu MX6 potential model spot as the M681Q. A new phone from the company has turned up for certification purposes in China. Although nothing is confirmed, reports suggest this is likely to be the much-awaited Meizu MX6.

Leaks about the Meizu MX6 have been scant so far, but it looks as though that could be about to change. M681Q is the model number for a new smartphone from Meizu that has now been approved for radio certification. Very often after this kind of sighting we hear more very soon.

According to the certification listing the Meizu M681Q has GSM / TD-SCDMA / WCDMA / CDMA2000 / TD-LTE / FDD-LTE network support. That indicates full network support for China, and it’s reported that the naming scheme points to the upcoming unnamed smartphone being the successor to the current Meizu MX5.

Sadly the filing doesn’t give any information on specs about the device. However, it does prove the existence of an upcoming Meizu smartphone, and the fact that it has appeared for radio certification is an indication that things are progressing. Once we see further certification spots such as 3C or TENAA those will be further signs that a launch is closer. Speculation suggests a possible release for the Meizu MX6 in April although this is not confirmed yet.

Meanwhile rumored specs from a benchmark appearance of a handset tipped to be the Meizu MX6 include a MediaTek Helio X20 deca-core processor with Mali-T880 MP4 graphics, and 3GB of RAM. The device in benchmarking had Full HD display resolution of 1920 x 1080 though the screen size was not given. The phone was running the Android 6.0 Marshmallow OS.

We’ll stress once again that all of the above is unofficial so do keep that in mind. Nevertheless if the Meizu M681Q is indeed the Meizu MX6 it looks as though we’ll start hearing much more about this upcoming smartphone before too much longer. Are you waiting for the Meizu MX6?