General Mobile GM 5 Plus is a new Android One phablet 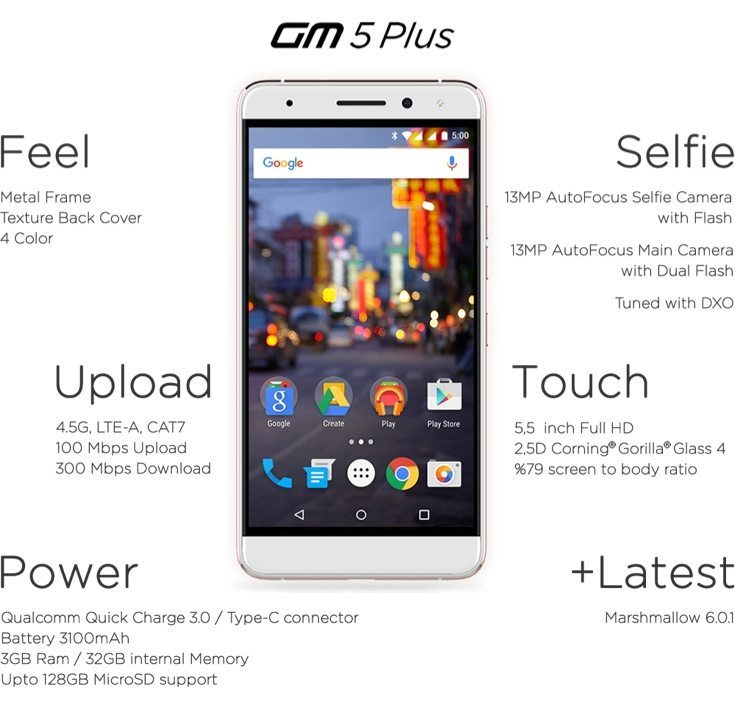 When Google launched the Android One initiative it was aimed at providing very affordable smartphones that would release running the latest version of Android and receive speedy updates. Although some of the handsets so far have been fairly popular in emerging markets, the low-end smartphones have not appealed so much to the mass market. Meet the General Mobile GM 5 Plus, a new Android One phablet with specs at the top of the mid-range sector.

Google has clearly had a rethink about its Android One smartphones and the GM5 Plus is a result of that. Instead of an entry-level handset it offers a more premium experience. The General Mobile GM 5 Plus will be launched in international markets with a price equivalent to $300. That’s around Â£215, â‚¬270, or Rs. 20,600. It will release first in Turkey followed by a further 15 markets.

The specifications are a definite step up from earlier Android One smartphones, giving the General Mobile GM 5 Plus a wider appeal. It’s powered by a Snapdragon 617 processor, and has a 5.5-inch display with 2.5D Corning Gorilla Glass 4 and Full HD resolution of 1920 x 1080. There’s 3GB of RAM and 32GB of internal storage that can be expanded with microSD card to 128GB. Further specs consist of a 13-megapixel rear camera with dual flash, and a 13-megapixel front-facing selfie camera with autofocus and flash.

It’s juiced by a 3100 mAh battery with Quick Charge 3.0. The phone also features LTE Cat.7, WiFi ac, and USB Type-C support. As far as the build is concerned the GM5 5 Plus has a metal frame and plastic back with a textured finish. It will be running the latest version of Android, 6.0.1 Marshmallow out of the box.

It’s going to be extremely interesting to see if the General Mobile GM 5 Plus makes any impact on the market. Could you be tempted to buy this Android One smartphone if it releases where you are?