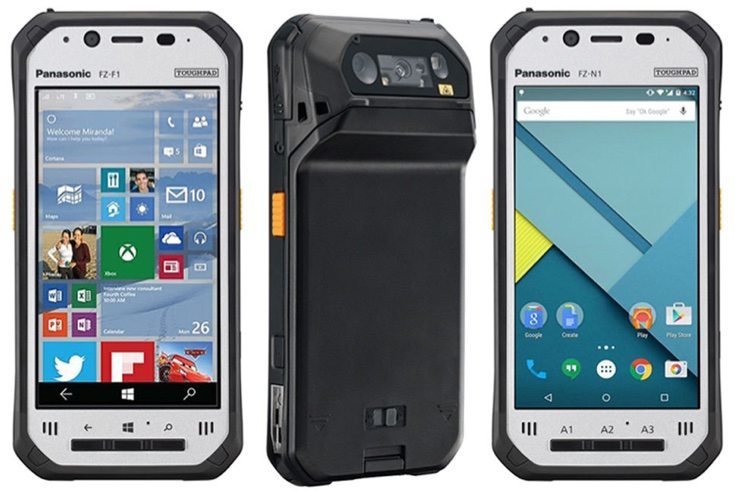 We’re seeing a host of new devices unveiled at Mobile World Congress right now, and two rugged smartphones from Panasonic have just joined them. The Panasonic Toughpad FZ-F1 Windows 10 and FZ-N1 Android phones have now been announced, and are built to withstand the elements, drops, and more. We have the gen on specs, features, and prices coming right up.

These two new Panasonic smartphones share the same specs and features but have different operating systems. The Panasonic Toughpad FZ-F1 runs Windows 10 IoT Mobile Enterprise, while the Panasonic Toughpad FZ-N1 runs Android 5.1.1 Lollipop. They’re built for durability and meet IP65, IP67, and MIL-STD-810G standards. They means they can cope with drops of up to 6 feet, use in demanding environments, and can withstand 30 minutes of being in up to 3.3 feet of water.

They have a sunlight viewable multi-touch display featuring rain sensing and glove touch mode. There’s also an optional stylus pen. Specifications of the dual SIM Toughpad FZ-F1 and FZ-N1 include a 2.3GHz Snapdragon 801 quad-core processor, Adreno 330 graphics, and a 4.7-inch display with HD resolution of 1280 x 720. There’s 2GB of RAM, 16GB of internal storage (expandable with microSD to 64GB), an 8-megapixel rear camera with flash, and 5-megapixel front-facing snapper.

Connectivity includes 4G LTE, WiFi 802.11 a/b/g/n/ac, Bluetooth 4.1, NFC, and GPS. Juice comes from a 3200 mAh battery with optional 6200 mAh battery pack. These phones will release at various points starting from next month. The Panasonic Toughpad FZ-N1 Android WiFi model will release in March with a price of around $1,499. A voice model will be available in the summer. Meanwhile the Panasonic Toughpad FZ-F1 Windows 10 IoT Mobile Enterprise smartphone with data and voice will arrive in fall 2016 at around $1,599.

What are your first impressions of the new Panasonic Toughpad FZ-F1 and Toughpad FZ-N1. Would you consider buying either of these new rugged smartphones?