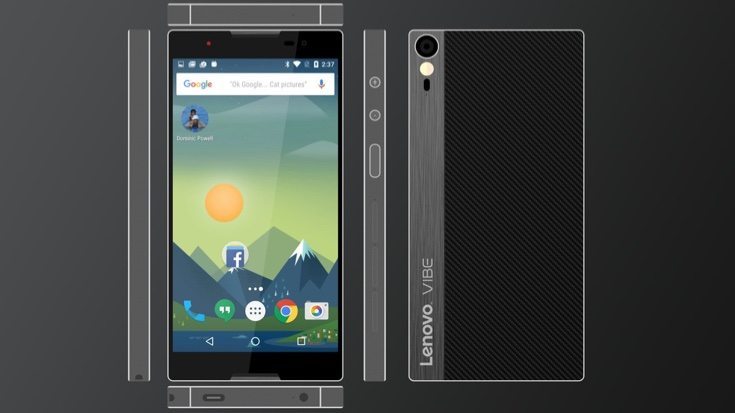 We spend a lot of our time at Phones Review covering new smartphones but occasionally we like to take a look at concept designs to tease ourselves with possibilities. Today we’re showing a Lenovo Vibe Alpha design that comes with comprehensive specs. The designer particularly focuses on the display technologies that are used for this idea.

This Lenovo Vibe Alpha concept is a good-looking handset as you can see in the image below. We feel the reverse of the handset in carbon fiber with a brushed aluminum camera strip and engraved logo is especially appealing. It’s built with an anodized aluminum frame with nicely chamfered edges. It also meets IP67 certification standard with nano-coated ports and acoustic vents. It has been designed by DeviantArt member r4yNTv who has put a huge amount of work into an extremely comprehensive specs sheet for the smartphone.

For example rather than merely telling us it has a 5-inch display with Full HD display resolution of 1920 x 1080, we’re informed of many of the finer details such as 1500:1 contrast ratio and 90% NTSC color space. Add to that display enhancements such as MediaTek’s MiraVision Display engine, SmartScreen, color tuning, ClearMotion 60 fps interpolation, and MiraVision HQ 1080p upscaling, and you begin to see just how much effort has gone into this Lenovo Vibe Alpha idea. Oh, and don’t forget display protection with Asahi Dragontrail-X Cover Glass.

The Lenovo Vibe Alpha is a dual SIM dual standby smartphone with 4G LTE connectivity, dual front-facing speakers, fingerprint sensor, and USB Type-C port. It’s running Android 6.0.1 Marshmallow with a guaranteed update to Android N. Approximate dimensions are 138mm x 69mm x 8.2mm with a weight of around 130 to 140g. The designer even gives a price of around $199. An extra suggestion is a larger Lenovo Vibe Alpha Plus with 5.5-inch display and other improved specs for around $229.

We rarely see as much work go into a concept design as this one, so we urge you to check out the source link below for the full gamut of specs. Now we’d like to hear what you think of this Lenovo Vibe Alpha design. Would you like to see Lenovo produce something similar to this concept?