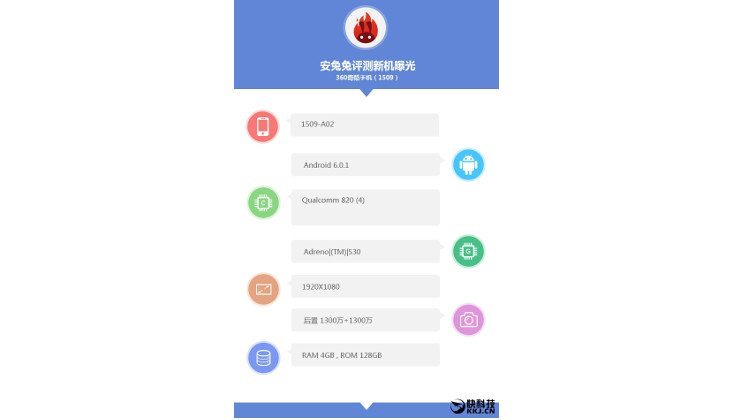 QiKu announced several solid smartphone towards the end of last year, and it appears they have a new one in the works. We don’t have a name for the unannounced QiKu smartphone yet, but we do know it’s specifications thanks to a new leak.

QiKu may not be a brand familiar to most as the company is the product of a partnership between Coolpad and Qihoo 360. They made a bit of a splash with the announcement of the QiKu Q Terra series for India, and the mysterious device that has passed through AnTuTu is going to turn a few heads as well.

The device shown in the benchmark listing has the model number 1509-A02. It will have a resolution of 1,920 x 1,080, but the actual size of the display wasn’t given. It gets its power from the popular Snapdragon 820, and you can expect it to fly as you’ll get 4GB of RAM as well. The same can be said of the storage with 128GB under the hood, so you won’t need to turn to the cloud anytime soon. Last but not least, is a Dual 13MP snapper and Android 6.0.

A few of the QiKu 1509-A02 specifications are still up in the air, but it’s shaping up to be a solid smartphone from what we’ve seen so far. As you’d expect, pricing and availability of the new QiKu smartphone is unknown, but we’ll keep you in the loop as we learn more.