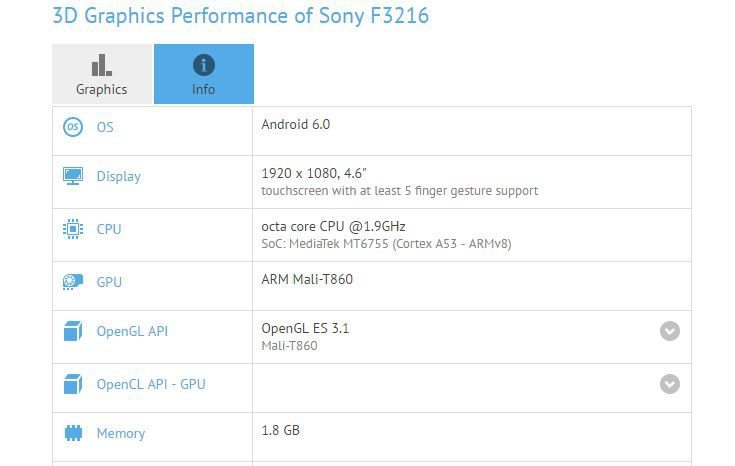 Another day, another benchmark listing. This time Sony has a couple of handsets making the rounds, and we’ve got the scoop on the Sony F3311 and Sony F3216 specifications.

Sony is one of the few companies that have yet to make a major mobile splash in 2016, but they do have a two new devices that will see a release somewhere down the line. They don’t hail from the Xperia line, so you shouldn’t expect world class specs from the Sony F3216 or the Sony F3311. That said, both are set to run Android 6.0 straight out of the box and one has some very interesting specifications given it size.

We’re going to start with the lower spec’d of the two devices, the Sony F3311. This handset will have a 4.6-inch panel and gets its juice from a quad-core MediaTek MT6735 processor clocked at 1.3GHz and 1.5GB of RAM. The internal storage is expandable, but listed at only 16GB and the camera combo is solid at 13MP on the back and 5MP on the front. Bluetooth 4.1, GPS, 4G LTE, and optional Dual-SIM connectivity round things out for the Sony F3311. 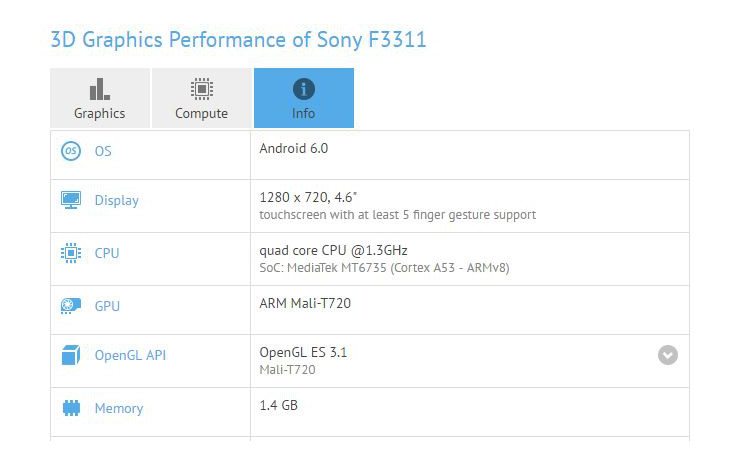 As for the Sony F3216, it will have the same connectivity options and storage capacity as the F3311. That’s where the similarities end though, as the resolution on its 4.6-inch panel has been bumped up to FHD and it will be powered by the speedy octa-core MediaTek Helio P10 and 2GB of RAM. The camera combo is getting a massive upgrade as well with a 21MP sensor on the back and a 16MP snapper on the front for your selfies.

At the moment, we have no idea what Sony’s new handset could turn out to be or when we’ll see them. It seems odd to have two 4.6-inch models appear at the same time, but they are different enough in the specs department and could have different designs as well. Needless to say, we will keep you in the loop as more details surface on the Sony F3216 and the Sony F3311.