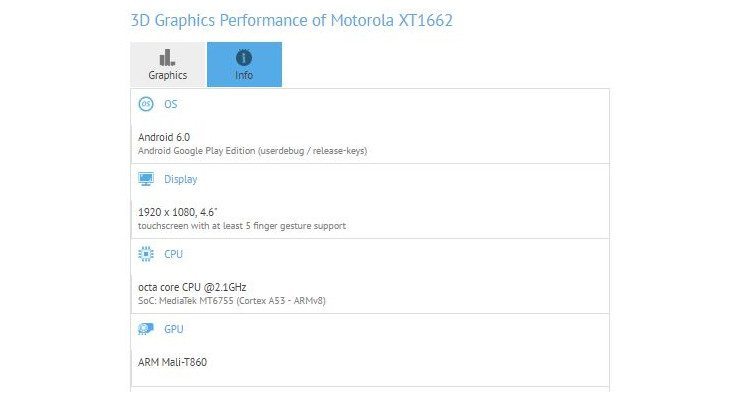 Another day, another leak in the smartphone world and this time around it comes from the popular benchmarking site GFXBench. The Moto X Play 2016 has possibly made an appearance, which means we have the skinny on those specifications.

Whenever a company announces a new product line similar to an old one, fans always wonder if their favorite line is being phased out. When Motorola unveiled the modular Moto Z, many feared a member of the X lineup had seen its last hurrah, but that apparently won’t be the case just yet. A device bearing the model number Motorola XT1662 has gotten benchmarked and appears to be a solid upgrade over last year’s version of the X Play.

According to the listing, the Motorola XT1662 is set to sport a 4.6-inch FHD display… which is a drastic drop from the 5.5-inch panel found on the previous model. The chip running the show is a 2.1Ghz octa-core MediaTek MT6755, and the GPU is listed as an ARM Mali-T860. 3GB of RAM will help keeps things moving along, which is a gig higher than the 2015 edition. Other options listed include 16GB of storage, a 16MP rear camera, an 8MP front-facing camera, and Android 6.0.

For now, you’ll want to take the Motorola XT1662 listing with a small dose of salt. The listings can occasionally have errors and the small display and a few other things just don’t sit quite right at the moment. Considering the 2015 edition was announced in July, we should hear something official in the coming weeks ahead.

What would you like to see from the Moto X Play 2016 edition?