Xiaomi Markw appears on GFXBench with an octa-core chip 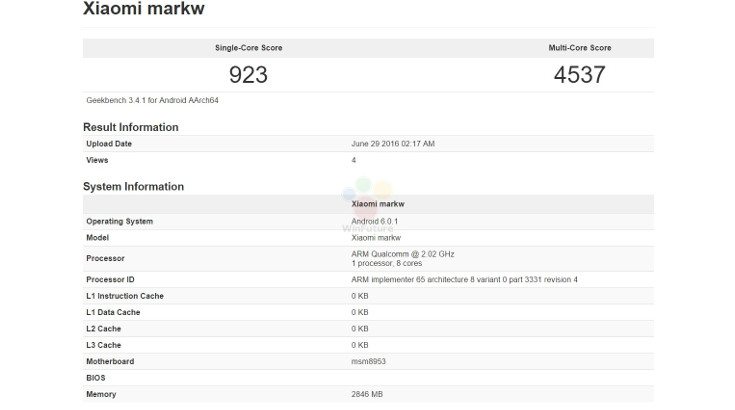 Each week a number of unannounced smartphones appear through agencies like TENAA, the FCC and benchmarking sites. This week is no different, and today a handset dubbed the Xiaomi Markw has reared its head with some interesting specs.

We have already showed you a few unannounced smartphones this week when the Honor 8 passed through TENAA which was soon followed up by the Moto E3 getting Wi-Fi certification. Now Xiaomi is stepping up the plate with a new handset codenamed the Xiaomi Markw. It’s an unusual moniker to be sure, but there’s nothing odd about the specifications.

According to the GFXBench listing, the Xiaomi Markw was tested in the wee hours of the morning running Android 6.0.1. The processor is listed as an ARM Qualcomm octa-core chip with a clock speed of 2.02GHz, which is the Snapdragon 625. It has 3GB of RAM as well, which takes it away from the mid-range class and towards that fine flagship line. Unfortunately, no other details were given but the handset should have an FHD display based on the chipset.

At this time, there are more questions than answers surrounding the Xiaomi Markw as we have no idea what this one will turn out to be… or when it will actually arrive. Whenever that is, it should be affordable given the company’s history and the device’s specifications.