Xiaomi has plenty of unannounced smartphones set to make a debut, and a new one may have just crossed our radars. It’s dubbed the Xiaomi Altun and it looks to be a solid mid-ranger according to a series of benchmark listings.

We see plenty of handsets come out of the Far East each year, and Xiaomi is responsible for more than a few of them. While they do not produce as many as some of their competitors, their releases are generally solid and tend make folks in the West envious. It remains to be seen where the Xiaomi Altun will turn up, but it will be a mid-ranger according to Geekbench. 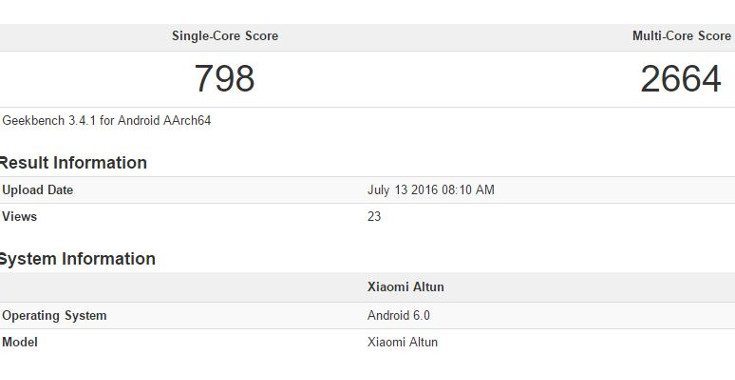 A device codenamed the Xiaomi Altun has shown up on Geekbench with a smattering of specs and respectable scores. Its last testing was on July 13th where it has a Multi-core score of 2664 while the Single-core score was 798 although higher scores were achieved at earlier dates. It has 2GB of RAM and the processor is listed as an octa-core chip clocked at 1.4GHz, but that is all we know for now aside from the fact it was tested running Android 6.0.

There’s not much use in guessing what moniker the Xiaomi Altun may carry with it as they have several rumored smartphones in the works. Whatever name it ends up with, we expect it to be priced fairly given what we know of the specs thus far.