Coolpad A9S-9 appears on GFXBench with 4GB of RAM

Coolpad has been quietly upping the specs on their handsets this year as we have seen a number of high-powered handsets from the company. The Coolpad A9S-9 is their latest and looks to continue the trend with specifications in the flagship class.

The last time we checked up on Coolpad, we took a look at the Coolpad Note 3 Lite which landed in India. While that handset was solid and affordable, it was lacking in a few areas including the display. If you didn’t jump at that one, you may be more inclined to take a look at the Coolpad A9S-9 which recently appeared on GFXBench.

According to the GFXBench listing, the Coolpad A9S-9 is going to be a bit of a beast. It has the octa-core chip known as the Helio P20 under the hood and it gets a nice boost from 4GB of RAM. The storage is listed at 53GB, which is how much you will have to use out of the box out of a grand total of 64GB. 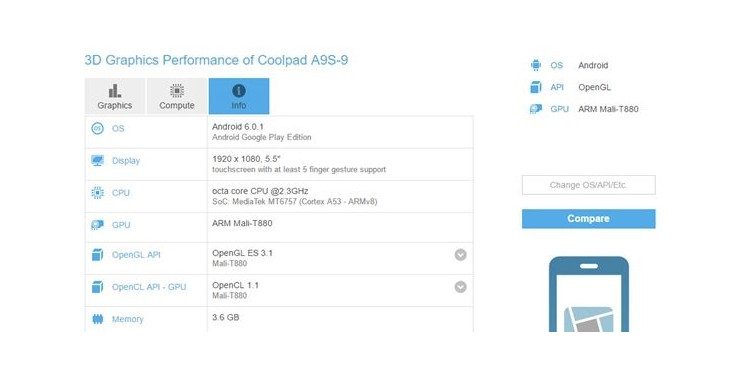 The cameras will be impressive as well, with a 12-13MP sensor on the back and an 8MP snapper on the front. The handset is listed with a single SIM card slot and was tested running Android 6.0. Last but not least, is a 5.5-inch display with a resolution of 1,920 x 1,080.

Coolpad’s devices are generally affordable and we do not expect that to change with the release of the Coolpad A9S-9. At this time, there has been no word on a price or potential release date, but we will keep you posted on any incoming news.