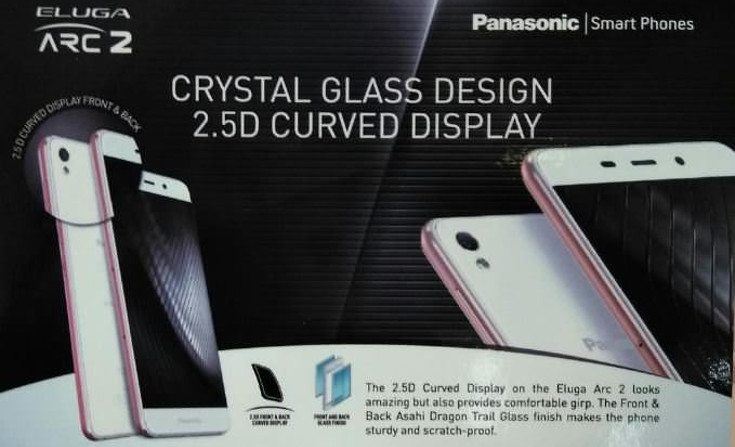 If you reside in India, there’s a new handset headed your way this week from Panasonic. The Panasonic Eluga Arc 2 is priced at Rs. 12,290 and offers up mid-range specs in a lovely little package.

Panasonic’s Eluga line is a big one, and we have seen it expand more than once this year. The Panasonic Eluga Arc 2 is the latest smartphone to rear its head from the lineup and on paper, it appears to be solid. It’s also a nice looking smartphone thanks to a slick glass backside and a frame made from aircraft-grade aluminum.

In terms of power, the Panasonic Eluga Arc 2 will be able to handle most things you throw its way thanks to a quad-core 1.3GHz processor and 3GB of RAM. That coupled with the 5-inch 720p IPS display put it squarely in the mid-range class, which is a popular place to be at the moment. As for the storage, the Panasonic Eluga Arc 2 comes with 32GB but you can kick that up to 128GB through the usual means.

On the backside of the Panasonic Eluga Arc 2 sits an 8MP sensor with an LED flash while the front-facing snapper clocks in at 5MP. Connectivity options include Bluetooth 4.0, GPS, Wi-Fi, 4G VoLTE, USB OTG, and an IR Blaster. The Dual SIM device will draw its power from a 2,450mAh battery and will run Android 6.0 when it arrives at your doorstep.

We have said it before and we will say it again — Panasonic puts out some nice handsets. The Panasonic Eluga Arc 2 is a looker and one to consider if you can live with a few mediocre areas like the display and processor. The smartphone is ready to roll in the region and available in Rose Gold and Gold for Rs. 12,290 which equates to around $184.