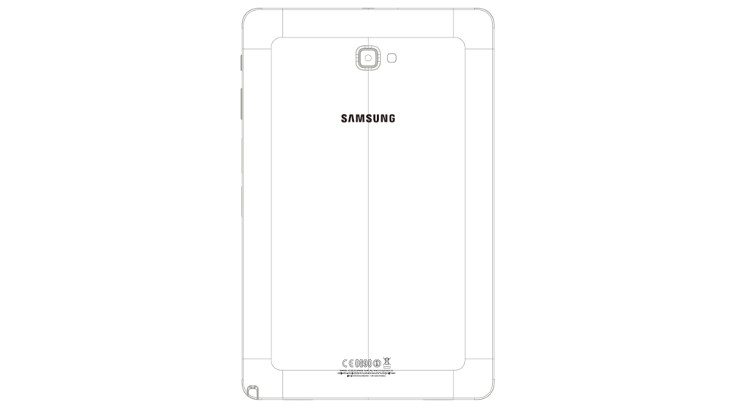 Samsung is seemingly gearing up to launch a new tablet, which has just rolled through the FCC. The slate in question carries the model number SM-P585 and is believed to be the Samsung Galaxy Tab A 10.1.

When Samsung first burst onto the smartphone scene, they had a large variety of slates available to go along with their handsets. Over time, the number of smartphones in their arsenal has continued to grow while their tablet launches decreased substantially. They still drop a half-dozen or more slates each year, and the Samsung Galaxy Tab A 10.1 with an S Pen may be the next one released in the states.

As we’ve said before, the FCC is far from a wealth of information when it comes to specifications on incoming devices. Occasionally we get a photo, and if we are lucky a diagram will sometimes let us know what a device has in store for us. The latter is the case for the SM-P585 as you can clearly see a slot for the S Pen on what looks like about an 8-inch slate. That said, it could be a 10-inch panel based on a GFXBench listing that has the device listed with a 1,920 x 1,200 display.

The Samsung SM-P585 will be able to run most things you throw at it with 3GB of RAM and an octa-core chip clocked at 1.5GHz. An ARM Mail-T830 will handle the graphics, and there is 11GB of usable storage, which means it has 16GB out of the box. We’re going to assume it will have a microSD card slot as well because leaving that out would not be wise. The only other features to note from the GFXBench listing are the cameras with an 8MP rear snapper and 2MP front-facing camera.

At the moment, we have no idea when the Samsung Galaxy Tab A 10.1 aka the Samsung SM-P585 will launch. With IFA around the corner, that would be the likely time although Sammy has been known to launch slates with very little fanfare.

Are you interested in seeing what Samsung has to offer with its tablet lineup this year?