While all the leaks were pointing out to a September 21st release date, LeEco has kept its word and have made the Le Pro 3 official. If you were really excited about the 8GB variant, you will have to be disappointed as the company has unveiled two variants with 4 gigs and 6 gigs of RAM respectively. But there’s a lot of stuff to be happy about and the price of the Le Pro 3 is one of them.

LeEco is one of the better Chinese smartphone brands. They’ve already set up their base at Silicon Valley and are trying to take on the big guns. With the launch of the Le Pro 3, they will definitely raise a few eyebrows for the price at which it is offered.

Le Pro 3 price starts at just $270. This goes on to about $450 which is due to LeEco’s video services that are bundled with the phone. If you’re confused about the various models of the Le Pro 3 and their prices, don’t worry, we’re here to help you. 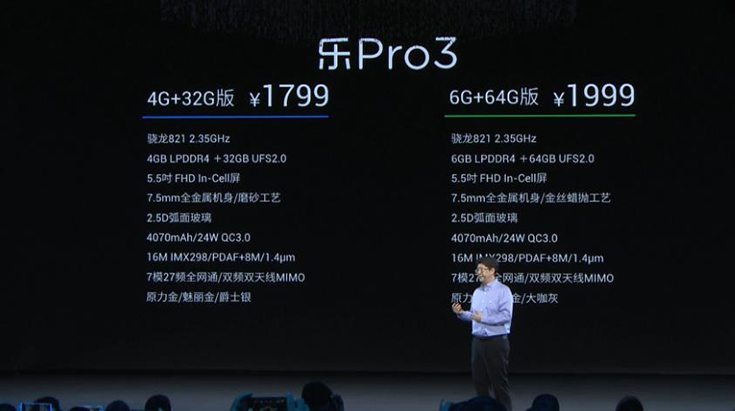 For starters, all the models have a the same specs for the display, camera and battery. The 5.5-inch FHD display with 2.5D glass on top of it is housed in a 7.5mm thick premium metal body. Even with a really thin body, LeEco has managed to put in a 4,070mAh battery inside the phone.

The rear camera is a 16MP shooter with PDAF and flash while on the front we have an 8MP shooter. There is also a fingerprint scanner at the rear. Now for the Le Pro 3 price details. Check out the table below:

The last two models are priced higher due to LeEco’s bundled video services. If you don’t need those, just forget the last two variants. The phone will go on sale on September 28th at 10:00 AM, but the reservations start today at 5PM in China. We are blown away by this one, are you?