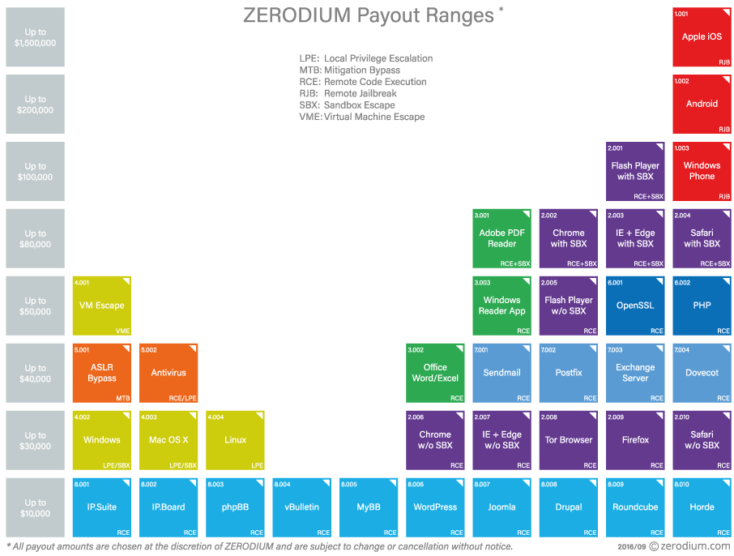 Yes folks, you got that right: you will be a millionaire just like that if you’re capable of finding a Zero Day Exploit for iOS 10, Apple’s latest mobile OS. Just think about how your life would change in a jiffy! It sounds pretty cool, huh? If you were reading my other “hacking related” articles like this one, you might think that, oh well, maybe I’ll give it a try, I could use 1.5 million bucks around the house. Maybe I’ll fix the roof, maybe I’ll relocate to Hawaii, you know what I mean?

But the weird thing is that the respective bounty is not offered by Apple. Thing is, today’s news is a true shocker for the Cupertino based company, as the hefty reward comes from Zerodium, which is  something between a black hat and a white hat organization, a shade of gray if you like. Basically, these guys are offering a huge amount of cash for an iOS 10 Zero Day exploit,  a sum which is 7 times more than Apple themselves are putting on the table. Indeed, Apple too thought about using this clever trick, i.e. to motivate the hackers out there, the free market sort to speak, in order to improve their iOS 10 security, just like Google was doing for quite some time now.

Zerodium is actually a start-up company, the brain-child of the infamous French based Vupen, and these guys are very smart in this writer’s opinion. Their modus operandi is to buy exploits and things of that nature from “wild hackers” and then to sell them to governments and companies and then again, to who knows whom (for more dough obviously)?

Zerodium offered half a mil in the past for an iOS 9 zero-day exploit, but now they upped the ante three fold for iOS 10. To get the $1.5 million, you’ll have to deliver a previously unknown Zero Day Exploit for iOS 10, as in a remote jailbreak which allows a 3rd party full control over the respective device. The same story goes for a remote jailbreak over an Android 7 Nougat running device, but the bounty is just $200,000.