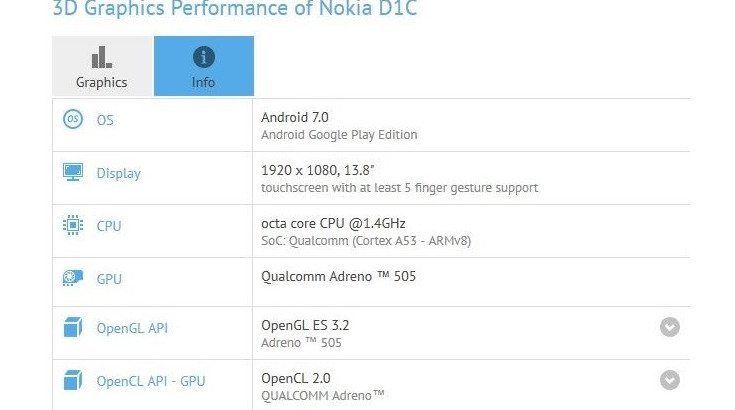 Since Nokia dropped out of the smartphone race, devices have been few and far between. When we first got wind of the Nokia D1C, people got excited although a new benchmark shows it may not be exactly what we were thinking. Ready to meet the Nokia D1C tablet?

The Nokia D1C specs have been popping up here and there over the past few months. Due to the branding, it has garnered plenty of attention. While most of the specs we had heard so far pointed towards a smartphone, that may not be the case. A device dubbed the Nokia D1C has shown up in the benchmark listings, and it’s a wee bit larger than your typical handset.

According to GFXBench, the Nokia D1C tablet sports a 13.8-inch display with a resolution of 1,920 x 1,080. The chip powering the show is listed as an octa-core processor clocked at 1.4GHz and is backed by 3GB of RAM. As for the storage, it’s listed a 9GB which means you’ll have 16GB out of the box but only 9GB after the OS install. Par for the course.

Once you get a load of the cameras on the Nokia D1C, you’ll further understand why folks may have believed this one was a phone. The rear camera is 16MP while the front-facing snapper clocks in at 8MP. Needless to say, that’s far larger than we normally see on any kind of slate. The usual suspects are present in the connectivity department as well, and the OS is listed as Android 7.0 Nougat.

There’s been no word on a release date for the Nokia D1C tablet, but it’s one we believe will go to market as it’s leaked too many times to be a total myth. Rest assured, we will keep you posted as more information comes to light as this one should be very popular whenever it lands.