Samsung Galaxy Grand Prime Plus gets listed with MediaTek chip

If you are still a fan of Samsung, there is a new budget-friendly device making the rounds that may be of interest. The Samsung Galaxy Grand Prime Plus has magically appeared out of the blue, and we’ve got the scoop on a few of its specifications.

Whenever a new smartphone or slate gets released, they always make the usual stops. That includes regulatory agencies like the FCC or TENAA although plenty of handsets stop through popular benchmarking sits like GFXBench or AnTuTu. The latter is where the Samsung Galaxy Grand Prime Plus has reared its head, and it has an interesting chip under the hood.

Samsung and Snapdragon have gone together like peanut butter and jelly. While we’ve seen the company’s Exynos chip become more prevalent lately, MediaTek… not so much. Well, that’s exactly what you will find under the hood of the Samsung Galaxy Grand Prime Plus as it sports a MediaTek MT6737T, which is a quad-core chip. The graphics will be handled by a Mali-T720 CPU and you’ll get 2GB of RAM to help move things along. 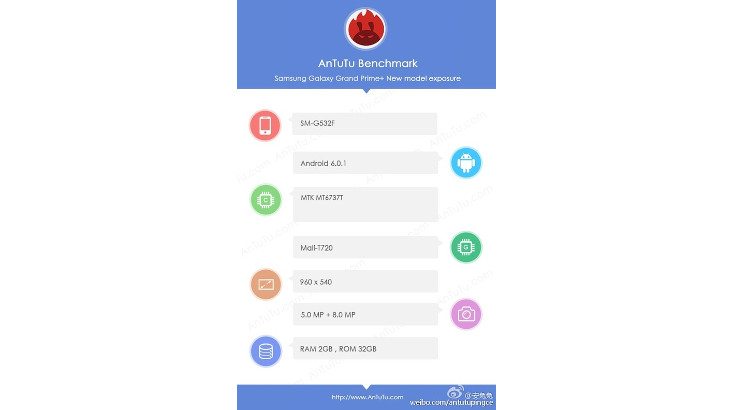 When it comes to storage, the Samsung Galaxy Grand Prime Plus will arrive with 32GB out of the box. There was no mention of expansion, but we will assume it has a microSD card slot until we hear otherwise. The cameras aren’t stellar, but sufficient with an 8MP rear camera and 5MP front-facing snapper. Other features include a 960 x 540 display of an unknown size and Android 6.0.1.

The Galaxy Grand Prime line is generally a yearly release although it remains to be seen if this one will roll out in 2016 or 2017. If it’s towards the end of the year, it may arrive with Android 7.0, which would be a nice perk for the budget-friendly handset.