The calendar may still read 2016, but nobody told Samsung that. We’ve seen a number of their 2017 variants come out to play, and today we have news on another one in the upcoming Samsung Galaxy A7 (2017).

Nary a week goes by that we don’t see something new from Samsung in the smartphone world. Whether it’s a metal clad mid-ranger bound for the Far East or an incremental upgrade to an existing series… they stay busy. The Samsung Galaxy A7 (2017) is their latest handset to make the rounds, and we’ve got the scoop on its specifications thanks to a brand new AnTuTu listing.

A device carrying the model number SM-A720F has rolled through AnTuTu, but there’s no guessing as to what this one will be. It clearly states it’s the Samsung Galaxy A7 (2017), which means this year’s model is due for an upgrade. According to the listing, the new model will have a display of unknown origins and size although it has a resolution of 1,920 x 1,080. The processor will be the Exynos 7870 and the RAM is listed at 3GB. Other specifications include 64GB of storage, Android 6.0.1 and a 16MP sensor on the front… and back. 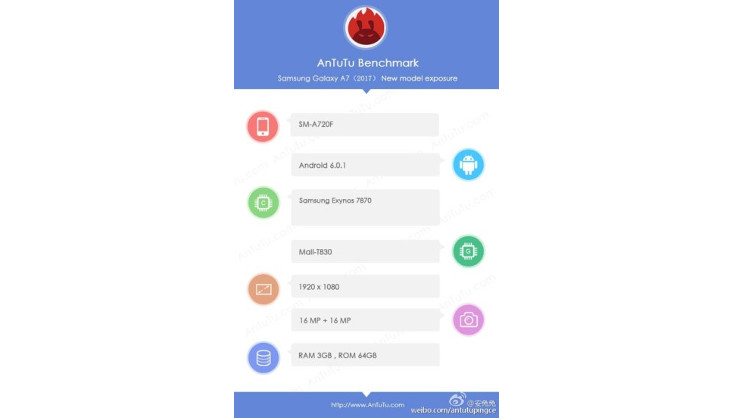 Now it’s time to compare. On paper, the new Samsung Galaxy A7 (2017) is an incremental upgrade over the old model. The RAM and display will stay the same while the processor receives a slight bump. The storage however has been increased significantly and the front-facing camera has also grown by a few megapixels. Three to be exact. While not listed, the handset should also sport a fingerprint scanner to go along with the usual bells & whistles although it will be interesting to see if the battery stays the same.

If the Samsung Galaxy A7 (2017) seems like your cup of technological tea, you probably won’t have to wait long to scoop one up. The previous version debuted in December and the new version should arrive around the same time. Needless to say, this one could prove popular so we’ll keep you in the loop as more details arise about its price and availability.