Remember 22Cans Curiosity game? The tapper left plenty of folks puzzled, and the same can be said of Godus. The Trail A Frontier Journey is the company’s latest mobile game, and it may finally be the game folks have been waiting on from the mysterious company.

22Cans was founded by Peter Molyneux, a man that’s made a great video game or two in his time. He’s known for a few other things as well, but we won’t go into those today. The Trail A Frontier Journey is a game we got wind of a few weeks back when it went into the secretive Pre-Registration mode, and we’re pleased to say it is one of the cooler games we’ve played in the past few months.

The Trail A Frontier Journey carries an air of mystery to it just like Curiosity, but in a different sense as you are a traveler out to make his fortune. To accomplish this, you’ll have to walk along the trail collecting various material which you can use to craft goods and sell and camp sites. That’s the simple version of it, but there’s a whole lot more going on beneath the surface. 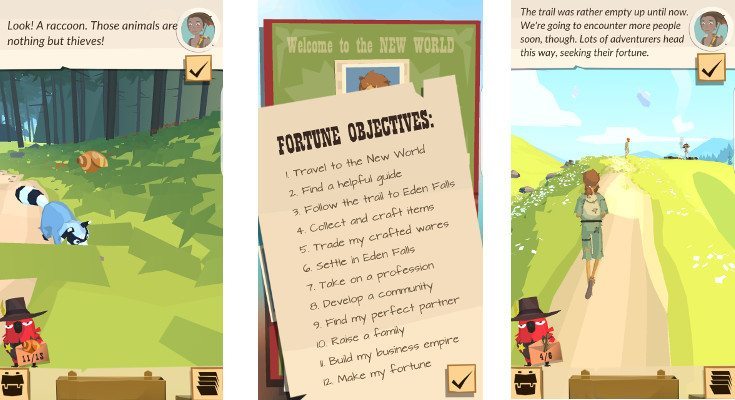 While we are still very early on with The Trail A Frontier Journey, apparently you can settle down and set up shop down the line. Marriage has been mentioned along with running your own business as well. Another mysterious element is the other players in the game. It’s never fully confirmed, but other people show up on the trail with countries listed beside their names which means we have multiplayer in a sense. You can interact with folks, but again, we’re still figuring this one out as we go.

Just like with Curiosity (initially), The Trail A Frontier Journey is a game we highly recommend checking out. It truly is a game almost anyone can enjoy, and it has a nice laid-back atmosphere which is a nice change of pace. Rest assured, there will be a The Trail A Frontier Journey review from us in a few weeks, but for now you can hit up the links below to begin the journey to Eden Falls yourself.