The Trail A Frontier Journey Review 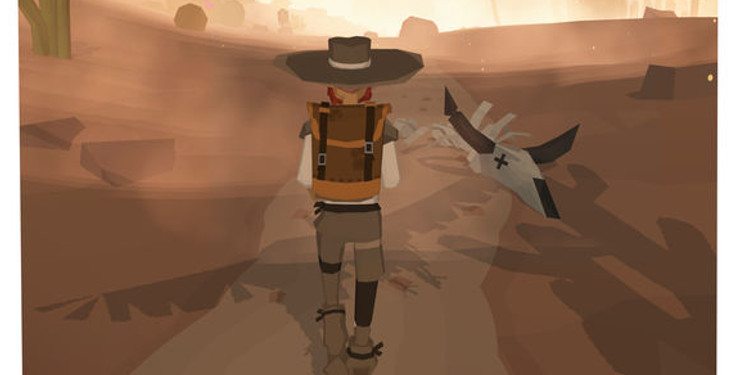 A few weeks ago, we told you about a new game from 22cans. After spending a considerable amount of time trekking to Eden Falls, we’re back with a quick review of The Trail A Frontier Journey.

The Trail A Frontier Journey is the latest game from Peter Molyneux’s studio 22cans. It was also a game we knew next to nothing about until it was practically upon us. As the name implies, it’s a game about an epic journey through a wild frontier but is also a tale of survival… and crafting. Lots and lots of crafting.

We hope you really like walking and collecting objects. That’s exactly what you’ll do 90% of the time in The Trail A Frontier Journey. The dev’s managed to make it fun as thankfully, so walking is as simple as dragging your finger up or down to adjust your speed. You get a health meter in the form of a heart, and it’s something you will want to keep a close eye on. The more you walk, the more steam you’ll lose and you can fall over on the trail in an instant. That can be very, very bad… 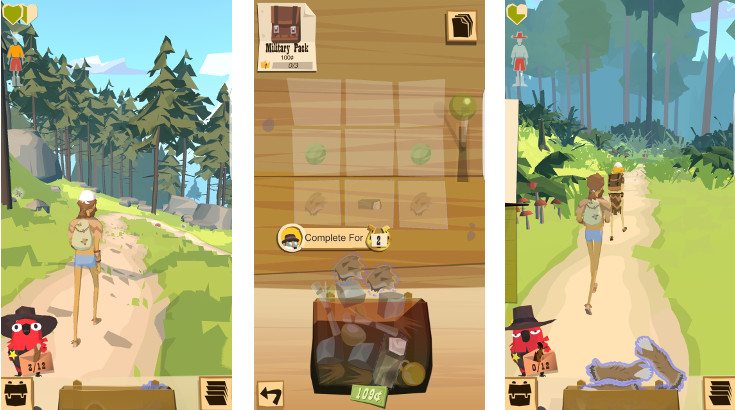 You are not alone in the wild frontier as you’ll see other folks strolling along the trail as well. If your health hits zero and you hit the ground, you can use Favors to be instantly revived or simply wait for your heart to refill. While this happens, loot shoots out from your sack and can be snatched by other players. There’s no rhyme or reason to it either, so you could lose an expensive item or a handful of pebbles.

Staying upright is crucial in the game and there are several items that can assist you with this. Apple, berries, meat and other edibles can be found along the trail or you can craft certain recipes for food. Alternatively, you can just craft headgear, shoes and other items to give you additional stamina although they will degrade by the kilometer.

As for the actual collecting, as you walk you can swipe side to side to look around and can drag any materials you 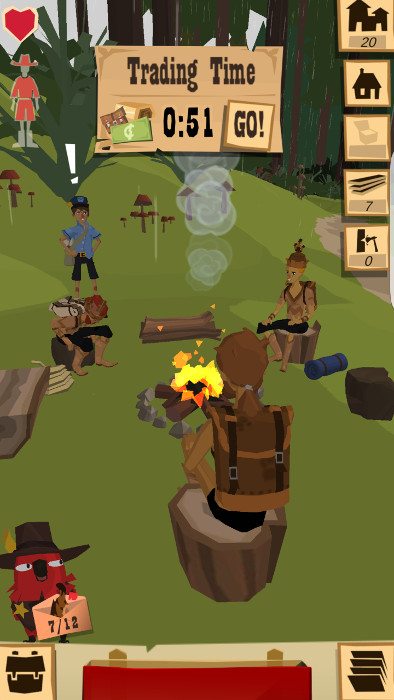 come across into your pack. Keeping that in order is a mini-game unto itself as things can fall out if you are overstuffed although adjusting and rearranging is a breeze. The weight also plays a part, so keep a close eye on the color of your pack. After you reach a certain point on the trail, you will hit a campsite which acts as a checkpoint and opens up trading with other players.

Campsites let you deal with a variety of things in The Trail a Frontier Journey, but crafting and trading are what you’ll spend the most time doing. We won’t rehash the whole process, but it’s a drag and drop affair complete with recipes obtained from Beatrice. You get those through missions and there are several different branches to take on including Lumberjack and Explorer.

Whenever you are ready to trade, the mini-game fires up and a conveyor belt appears. The goal is to be the player with the highest dropped item total by the end of the match. Items lose value the longer they sit on the belt and players can drag items off for purchase as well. It’s a cool little twist and while there are a few ways to farm the trading game, we expect those to be addressed shortly. The winner gets a prize and regardless of your tally, you get the loot obtained from your items. You are going to need that loot.

While we haven’t made our way through the entire map of The Trail A Frontier Journey, eventually you will reach Eden Falls depending on your pace and patience. If you have enough cash you get to experience the second half of the game which is all about crafting and collecting and homesteading.

Once you reach Eden Falls you can buy a plot of land and make it your own. In other words, you can buy items for decoration as you would with any city building game. That’s where those similarities end though as The Trail A Frontier Journey is social in a unique way. Players can pool resources to compete against other towns for prizes and you can craft special items from within your home or other homes in your town. 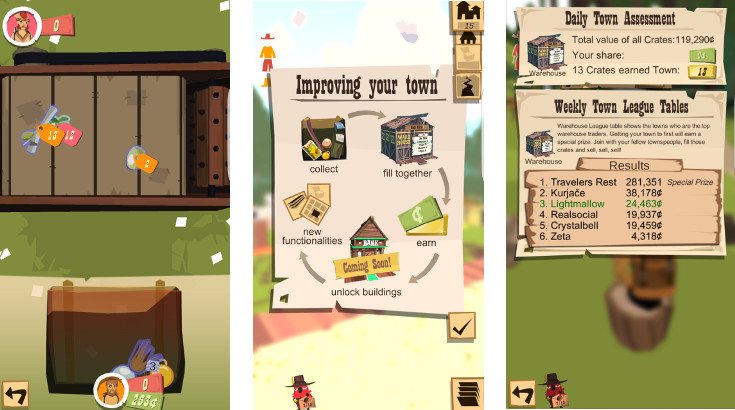 While we are still wrapping our heads around some aspects of The Trail A Frontier Journey, it is definitely an interesting take on a survival game. It’s a large world as well, so it’s not the type of title you will be finished with easily… unless you get tired of the grind. Yes, it is grindy at times but so are most games of this nature that require you to craft & collect.

The Trail A Frontier Journey is not going to be everyone’s cup of tea, but those that dig it will absolutely love it flaws and all. It can definitely suck you in and there is plenty of room for expansion in the future as well. As it’s free, it is a game we highly recommend checking out as it won’t cost you a dime as long as you can do without the favors.