Samsung has another patent for Flexible Smartphone Displays

The flexibile future isn’t quite here, but it isn’t far off either. We just got wind of another patent from Sammy showing a flexible smartphone display, and this one is a bit different from the rest due to a unique approach.

While we know that flexible smartphones displays will eventually arrive, we are still unclear on what form they will take. Patents have shown devices that can be folded in half or rolled into a scroll… something that’s hard to wrap your head around. Some are obviously more realistic than others given our current tech. The newest Samsung foldable smartphone patent shows a handset that will definitely bend thanks to an exoskeleton of sorts. 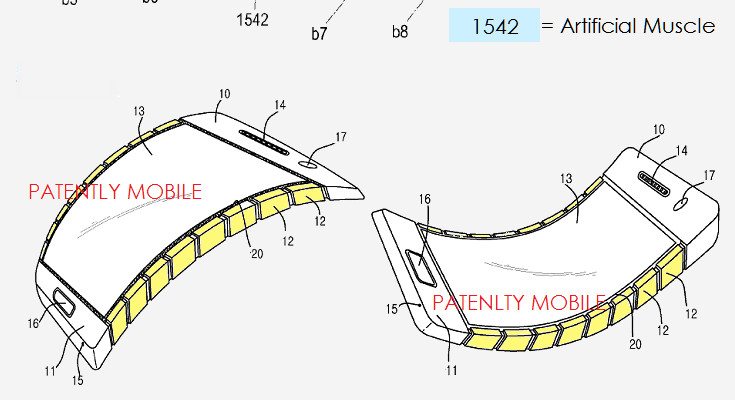 Sammy loves to use all sorts of high-tech buzzwords and a new one for this patent is a good one with “Artificial Muscle”. That’s what will help your flexible phone retain its shape we assume along with something called a dielectric elastomer film. Without straining our brains or yours, the substance is said to use electrical energy to do mechanical magic… like bending a phone. If the phone could magically bend itself like those slick “flexible” TVs we’ve seen they would certainly have a hit on their hands.

As much as we want to believe that we will see flexible smartphones next year, don’t hold your breath folks. A working prototype at a tradeshow is a definite possibility, but after the Note 7 debacle, innovation may take a backseat next year with Samsung. Other companies are said to be working on the tech as well, but we could have to wait a few more years before it is truly consumer ready.