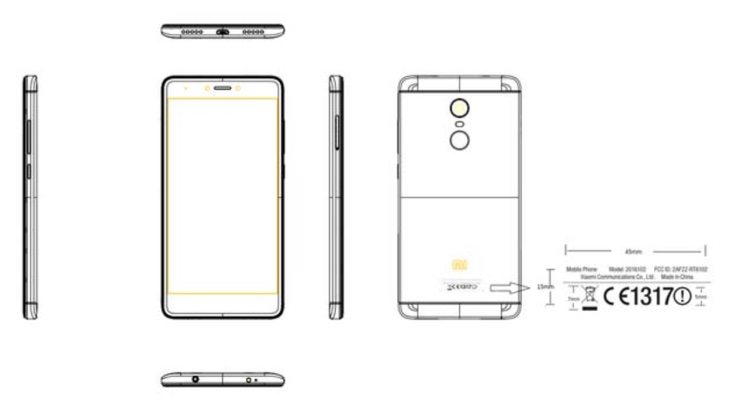 Xiaomi has a good name for producing popular smartphones at competitive prices, and the Redmi Note line has been a big hit from the company. The Redmi Note 4 appeared in China last year and is due to see its India launch next week. Now there are signs of its successor, with a Redmi Note 5 release prospect spotted at the FCC.

It’s often the case that we get first indications of a new smartphone in a line-up as the predecessor is still arriving for sale. A new Xiaomi smartphone for 2017 has appeared in a filing at the FCC US regulatory authority. The device has model number Xiaomi 2016102, and rumors indicate that this is the Redmi Note 5 although that’s not confirmed at this stage. The listing at the FCC gives a few details about the Xiaomi 2016102 to be going on with.

It’s a dual-SIM handset and some of the connectivity options include WiFi, Bluetooth, and 4G with VoLTE. It has a very decently sized 4000 mAh battery and is running the MIUI 8 operating system. Further information is not given. However, now that the prospective Redmi Note 5 has made it to the FCC, it shouldn’t be too much longer until we see it make further appearances. For instance we’d expect to see it emerge at Chinese regulatory authority TENAA soon. That should give us some leaked images and further specs and features.

What we can surmise at this stage is that the new smartphone will have some enhancements over the current Redmi Note 4. That phone released with a Helio X20 processor in China although the Redmi Note 4 India model will carry a Snapdragon processor. Further Redmi Note 4 specs include a 5.5-inch display (1920 x 1080 Full HD resolution), 13-megapixel rear camera and 5-megapixel front-facer. It has a 4100 mAh battery, features a metal body and fingerprint sensor, and comes in 2GB or 3GB RAM versions.

Our eyes will be kept peeled for further signs of the Xiaomi 2016102. We should have a clearer idea soon about whether this is indeed the Xiaomi Redmi Note 5, and in the meantime we’d welcome your thoughts about the upcoming device.