Vivo V5 Plus price reveal with pre-orders before launch 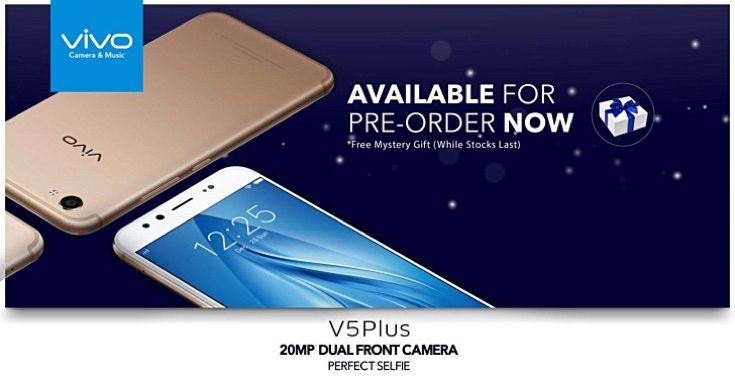 There have already been leaks about an upcoming smartphone from Vivo that sounds ideal for selfie enthusiasts. Now there is a Vivo V5 Plus price reveal, as pre-orders have become available before the launch of the device. The official announcement is expected to be taking place later this week on Friday January 20.

The latest information comes from a Malaysian online retailer (DirectD) that has already listed pre-orders for the V5 Plus. Pricing will vary according to region but the listing for a gold colored handset at least gives us an idea of what to expect. For Malaysia the Vivo V5 Plus price is shown as RM 1,799 (including some free gifts). That equates to around $400, £335, €380 or Rs. 27,500.

There’s good news for those waiting for the release of this phone too, as the listing says that shipping will commence on January 21. While this information concerns Malaysia, it seems likely that the phone will be available in other markets at around the same time. The product page also gives the specifications of the Vivo V5 Plus, and most of this ties in with earlier leaks.

It shows a Snapdragon 625 octa-core processor, with 4GB of RAM and 64GB of internal storage that can be expanded to 256GB via microSD. The phone has a 5.5-inch display (Full HD resolution of 1920 x 1080) with Gorilla Glass 5, and is juiced by a 3160 mAh battery. The big selling point of the device is definitely its camera arrangement. It has a 16-megapixel rear camera and a dual set-up at the front with 20-megapixel and 8-megapixel sensors.

Measurements of the dual-SIM handset are 153.8mm x x75.5mm x 7.6mm. It has a fingerprint scanner and is running the Android Marshmallow OS. All of the details show that the V5 Plus is a notable upgrade over the regular Vivo V5 and we’ll bring more news on its release elsewhere when we get it. Does it look like the ideal smartphone for you?