Gionee has kicked things up a notch of late and the Gionee A1 looks to be the latest smartphone from the company’s lineup. We had heard nothing about this one until today, but a new leak has given us a glimpse at what this one could bring to the table.

Last week we talked about the upcoming Gionee F5L which rolled through TENAA. That smartphone was a mid-ranger with solid specs, but the Gionee A1 is going to be a step up. This one is more along the lines of flagships if the leak pans out, but you will want to have your salt shaker nearby as always. We haven’t heard anything about an “A lineup” until today although it could be something they plan to unveil soon. There are a couple of big tech shows coming up after all.

The Gionee A1 is going to be a 5.5-inch handset with the popular 2.5D glass. The resolution isn’t quite in the flagship class at 1,920 x 1,080 but more than sufficient for most. Under the hood, you’ll find an octa-core processor clocked at 1.8GHz and backed by 4GB of RAM. That’s a bit faster than the one of the F5L and while the RAM stays the same, the storage has doubled up to 64GB. It will be expandable up to 128GB. 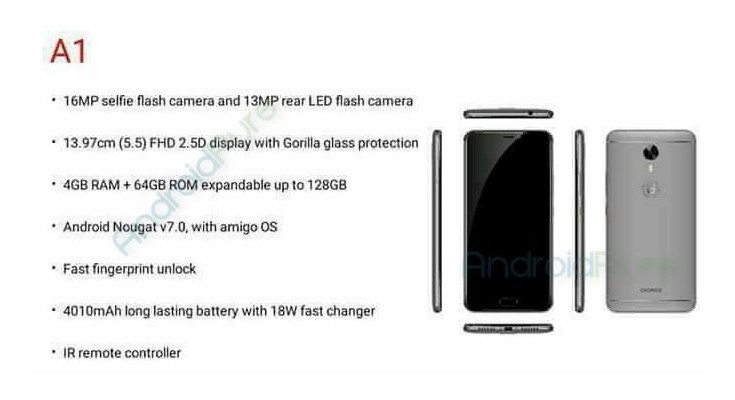 On the rear of the Gionee A1, you will find a 13MP sensor with an LED flash. The front-facing camera is larger at 16MP and also has a flash so those selfies should shine. Other features to note include a fingerprint scanner, IR remote, Bluetooth, Wi-Fi, 4G LTE, and Dual SIM slots. The Gionee A1 will have a similar battery to the F5L at 4,010mAh but will run Android 7.0 with Amigo OS out of the box.

The Gionee A1 design looks familiar but nice although we can’t make out much at the moment. We also don’t know when this one will land if it’s legit, but MWC would be a fine choice as it looks to be one of the better options from their arsenal.