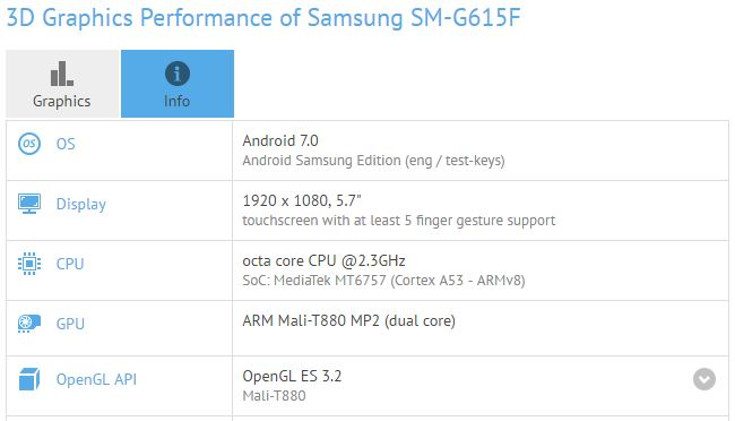 MWC is gearing up to kick off in the very near future, but we expect to see plenty of smartphones leaked before the big show. The Samsung Galaxy On7 Pro (2017) may make the trip or roll out quietly, of this we are not sure. What we do know however are the specifications, which have been revealed through a new Benchmark listing.

GFXBench has been busy of late with a slew of handsets getting tested on their way to an eventual release. Several new Samsung-branded tablets and smartphones have passed through the site including the SM-G615F, otherwise known as the Samsung Galaxy On7 Pro (2017). It’s the follow-up to last year’s On7 and the new model will get a significant upgrade under the hood this year.

The original Samsung Galaxy On7 Pro was mid-ranger on the low side of things. That’s partly due to the underwhelming Snapdragon 410 and the 2GB/16GB combo found under the hood. Well, it appears as if Samsung will drastically change things up this year. The new Samsung Galaxy On7 Pro specifications have been improved in almost every area and it will roll out with Android 7.0.

The display, RAM, processor, and storage capacity have all improved on the new Samsung Galaxy On7 Pro 2017. The front-facing camera has grown considerably as well, and given the larger display and better specs, the battery should see an improvement. While we don’t know it’s size at the moment, the previous model had a 3,000mAh battery.

On paper, the Samsung Galaxy On7 Pro (2017) looks like a very nice upgrade. It’s going to be an option for plenty of consumers if the company can keep the price down although we do expect it to be more expensive than last year’s model given the specs bump.