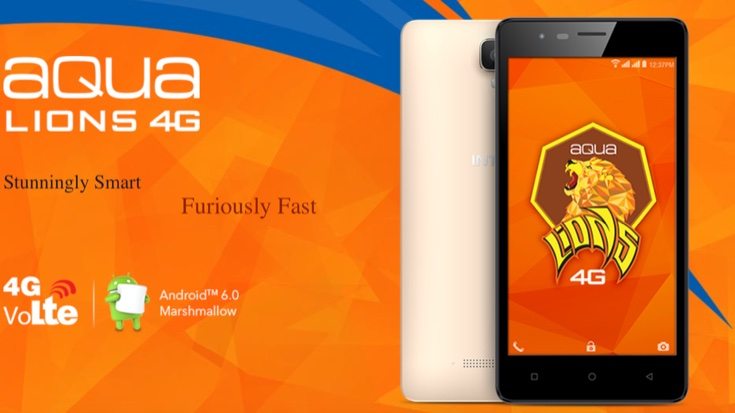 It has been very evident recently that Intex is on a mission to provide smartphone users in India with lower-priced 4G handsets. In doing so there have been several successors to earlier devices that are now 4G-enabled. A further example of this is the Intex Aqua Lions 4G variant that has just been launched at an affordable price.

Only last week we reported on the Intex Aqua 4.0 4G that was launched with a price of only Rs. 4,199. The new Intex Aqua Lions 4G price is Rs. 5,499 so we’ll outline what this latest smartphone has to offer for the money. The phone’s back cover is painted and it’s listed on Intex’s official website in Grey and Champagne colour choices. The handset measures 143.8mm x 72mm x 9.8mm and weigh in at 146.7g.

Specifications of the device consist of a 5-inch display with resolution of 854 x 480 resulting in 196 ppi. The display ration is 66.52% and it also supports two-finger touch. It has a 1.3GHz Spreadtrum quad-core processor with Mali 400 graphics. Further Intex Aqua Lions 4G specs include 1GB of RAM and 8GB of internal memory that can be expanded via microSD to 64GB. It runs the Android 6.0 Marshmallow operating system.

The new Intex smartphone has a 5-megapixel rear camera with autofocus and LED flash, along with camera features that include HDR, Face Detection, GIF creation, and Panorama. There’s also a 2-megapixel snapper at the front. The phone has a 2000 mAh battery to keep the juice flowing, with claims of up to 8 hours of GSM talk time or up to 350 hours of standby time. Connectivity options for the dual-SIM smartphone include 4G VoLTE, WiFi, Bluetooth, GPS, and USB 2.0. The phone has a 3.5mm audio jack and supports FM radio.

Does the new Intex Aqua Lions 4G smartphone interest you and do you think it is competitively priced? Let us know with your comments.