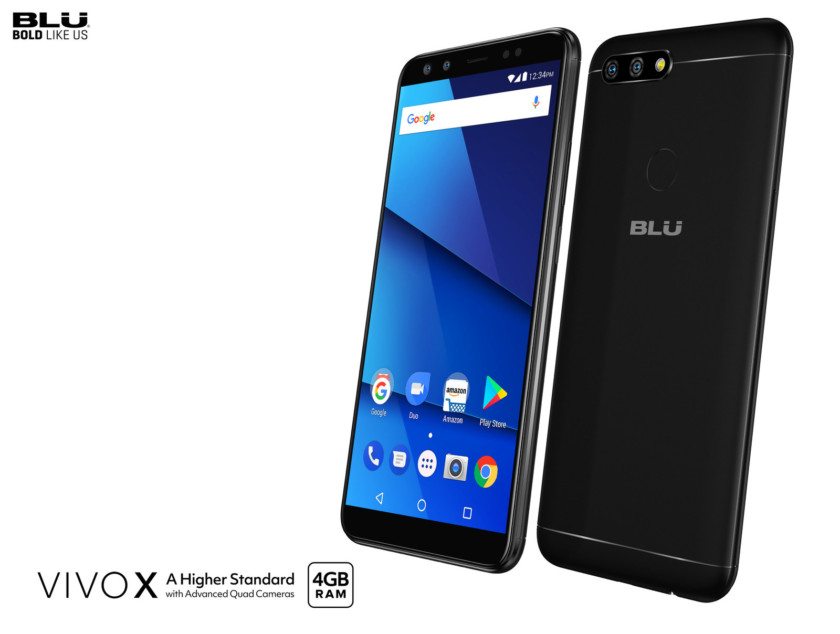 BLU might not be the first name you look for when you’re buying a new smartphone, but the company is doing good in the budget range. They managed to release many phones that offered excellent specs for a small price, increasing their dominance in the budget market on the west. Now, they announced the BLU Vivo X – their latest premium device. And judging by the cover, we’re already looking at another affordable device that packs a punch. Let’s see the details!

Normally, when you’re buying a cheap device, the design is the usual place manufacturers cut costs down. They’re often opting in for a plastic build. The BLU Vivo X doesn’t belong to this category, and instead it offers a beautiful aluminum finish. The color chosen is mat black. The rounded edges on the back give out for a premium feel in the hand, which is nice. On the front, you will find the 6” display with 1440 x 720 resolution. That also means that the panel has 18:9 aspect ratio, which is slowly becoming the standard for the smartphone of today. The bezels are small, but not that much to be unnoticeable. On the back, you will find the camera setup on the top corner, with the fingerprint sensor in the middle.

Performance-wise, the BLU Vivo X is packing decent hardware. Starting with the chipset, the device features the 2.6GHz Octa-core MediaTek Helio chip. It is capable enough to handle any task you throw at it, but it is noticeably slower than others from the Snapdragon lineup. Going forward to the memory, the Vivo X features 4GB of RAM – more than enough even for the hardcore multitaskers. You’re also getting 64GB of internal storage, which can be further upgraded with a MicroSD card. Finishing with the battery, the device will pack a 4010mAh one, which should easily last you throw a day and a half of use.

Switching to the cameras, the BLU Vivo X is jumping on the dual-lens setup on both sides. On the rear, you will find a 13MP + 5MP combination, which should take good pictures in the day. The second lens is added for the bokeh effect, which blurs out the surrounding of an object, giving you that perfect shot for your social media accounts. On the front, you will find a 20MP + 8MP combination, that can also do the bokeh effects. Some other notable features are that you can also record a video in slow motion, plus there is an enhanced beautify mode.

Finishing with the software, the BLU Vivo X will feature Android Nougat out of the box. This is probably the biggest downside of this device. Android Oreo has been out for more than a year. It’s sad to see smartphones in 2018 releasing with an older version of the software. We could see an update to Oreo in the upcoming period, but if we look back at the past, we’re not that much hopeful for it.

The BLU Vivo X is available right now for purchase through Amazon for $250. It is sold unlocked, which is a big plus for those that don’t want to be locked down with a carrier.

So, there you have it. What are your thoughts on the BLU Vivo X? Share your opinions in the comments below.