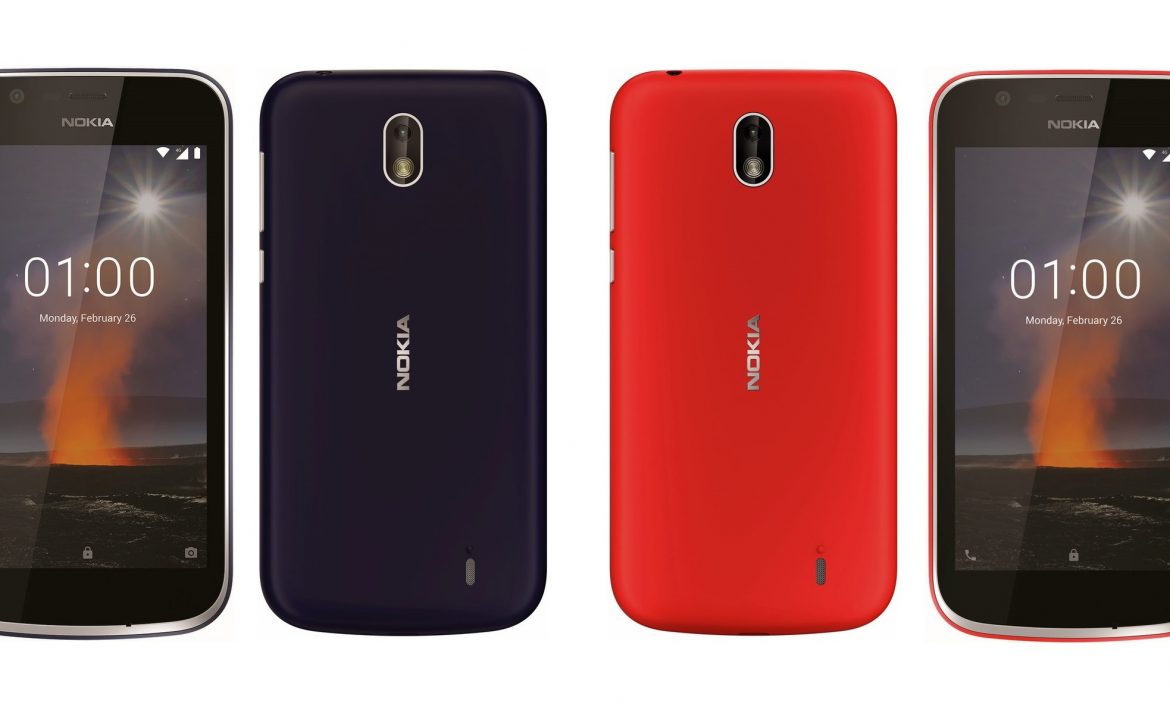 Nokia made one of the biggest comebacks last year. The company managed to keep on their promise to deliver devices for every budget running pure Android. As a matter of fact, the brand managed to get to the 11th place in the global brand rankings. It passed many other big brands, such as Alcatel and HTC, and it has no plans to stop there. At the Mobile World Congress in Barcelona, Nokia announced their upcoming devices. Today, we’re taking a look at the Nokia 1 – the cheapest device from Nokia with Android Go. Let’s begin!

As you could probably expect from a cheap phone, the design is the department where most cuts are made. But, the Nokia 1 has some personality in it, especially with the back covers. Beginning with the front, you will find the 4.5” display, which is expected for this price range. There are no capacitive buttons, which is a big bummer considering the big bezels it has. On the back, you will find the camera setup accompanied by the flash on the top. The Nokia logo sits proudly in the middle. The back is made from a polycarbonate plastic, which is decent. As a plus, the back can be changed with other colors, thanks to the Xpress covers. These were popular back in Nokia’s prime days, so it’s nice to see HMD bringing them back. This also means that the battery can be replaced, which is a huge plus.

First of all, starting on the performance side, you’re getting your money’s worth. Starting with the chipset, the Nokia 1 packs in a quad-core MediaTek processor, capable of handling most basic tasks. It is accompanied by 1GB of RAM, in the required range for Android Go. The performance won’t win any awards, bit with the optimized software, it should handle most task good. The internal storage inside the Nokia 1 is capped at 8GB, but you can upgrade it with a MicroSD card. Finishing with the battery, you will get a 2250mAh one, but it’s removable, as I mentioned before.

Switching over to the camera, again, don’t expect any miracles. On the back, you’re going to get a 5MP shooter accompanied by a flash. It should take decent pictures with enough light, though don’t expect any big sharpness. The same thing applies for the front camera, as you’ll get a 2MP shooter. Again, for the occasional selfie it will be fine. But don’t expect to vlog with it.

The biggest advantage of the Nokia 1 is in the software. The device will ship with Android Go, a special version of Android Oreo optimizes to run on devices with 1GB of RAM or lower. The optimizations are under the hood, and Google’s own software comes with special Go versions. These are basically stripped-down versions of the full packages, but without the loss of their main purpose. Consequently, this version on the Nokia 1 is not skinned, as the platform was meant to be.

The Nokia 1 will be available in April on every continent excluding the USA. The price will start at $85.

So, there you have it. What are your thoughts on the Nokia 1? Share them in the comments below.