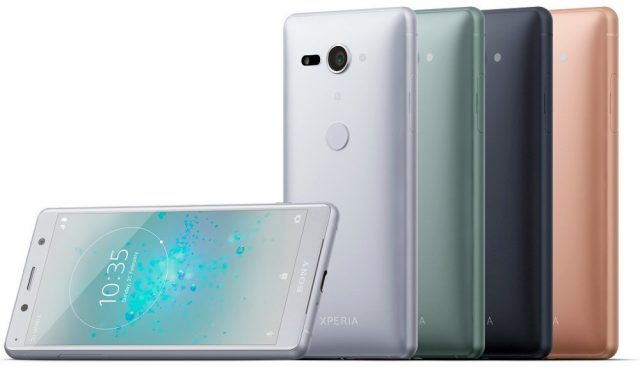 Sony is still struggling to come back into the mainstream smartphone market. The devices they released in the last few years had their design relatively unchanged for years, while the components inside left a lot to be desired. Some countries were even missing out on features, with an example being US users missing out on the fingerprint sensor. Nevertheless, they’re still trying hard to improve in those fields, and the XZ2 and XZ2 Compact might be the devices to do that. Let’s see them!

We’re glad that Sony is finally moving away from the traditional squared=off design and going to something more modern. Both the Sony Xperia XZ2 and the XZ2 Compact are featuring Ambient Flow, which should reassemble the concept of water. It has a nice look, but it looks pretty like the HTC U11. Plus, this makes the device a bit thicker, so it could be harder to operate it with one hand. On the front, you will find the 5.7” FHD+ display with 18:9 aspect ratio on the XZ2. On the XZ2 Compact, it is reduced to 5” with 1080p resolution. And it also keeps the 18:9 aspect ratio, don’t worry. On the back, on both devices you will find the camera setup on the top, with the fingerprint sensor right under them. Oh, and US users will also get this model – no more Sony devices without fingerprint sensors for them.

Starting with the performance, both the Xperia XZ2 and XZ2 Compact are housing powerful hardware. The Snapdragon 845 is the chipset of choice – Qualcomm’s latest and greatest offering. It is accompanied by 4GB of RAM, which should satisfy even the most notorious multitaskers. Switching to the internal storage, you’re getting 64GB of it, with the option to expand it furthermore with a MicroSD card. You can also use that slot for a second SIM, in case you don’t need more storage. Finishing with the battery, the XZ2 sports a 3180mAh one, while the Compact packs in a 2870mAh battery.

Rotating to the back, you will find the same 19MP f/2.0 camera on both devices. This sensor can also be found on the Xperia XZ1, but with few improvements. Pictures should come out nice and sharp, with excellent color saturation and dynamic range. In the night, it should be decent thanks to the f/2.0 aperture, though expect to get a lot of noise. For video, you can shoot slow motion in 1080p and 720p up to 960 fps. And if you’re not into that, the Xperia XZ2 is capable of shooting in 4K with HDR. It could very well be the first smartphone capable of doing that. On the front, you will find the 5MP shooter on both devices – perfect for the casual selfie.

Finishing with the software, you will find Android Oreo on both the Xperia XZ2 and the XZ2 Compact. It has small changes to the looks of it, but it is still close to stock Android. The biggest changes are in the features, as Sony is going to offer some features like the Xperia Assistant and a 3D scanner.

Both the Xperia XZ2 and the XZ2 compact will be available for purchase in late April. Unfortunately, there is still no pricing available for them.

So, there you have it. What are your thoughts on the Xperia XZ2 and XZ2 Compact? Share them in the comments below.