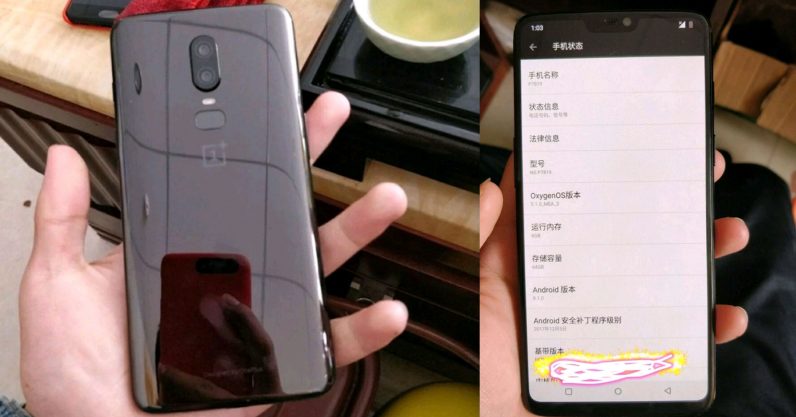 When a new company tries to enter an oversaturated world of smartphones, they need to make theirs stand out. OnePlus did that by making their device cost less from the premium competitors, without any hardware compromises. Since the first OnePlus One, the company did extremely well to gather a customer base. Their most recent device, the OnePlus 5T also continues the tradition – offering a premium device for a lower price. And now, we have details about the upcoming OnePlus 6. Let’s take a look at them!

An image of the supposed OnePlus 6 was roaming around the Internet in the past two weeks. From it, we can see that OnePlus might be changing up the design a bit. Starting with the front, we can clearly see that the company could be the next to embrace the notch. The push for extra screen space is slowly getting momentum, and since the Essential phone and iPhone X, many companies are making the notch a thing in their smartphones. From this image, we can see that it is smaller than the one on the iPhone X, but much bigger than the Essential phone. That notch pushes the 6.2” screen to the maximum, with extremely minimal bezels on each side. Rotating to the back, we can see the dual-camera setup in the middle, with the fingerprint sensor right under it.

As the image, details about the internals were also leaked in the past few days. Thanks to a presentation image on the Chinese microblogging platform Weibo, we have the components inside the OnePlus 6. Starting with the chipset, it is obvious that the device will feature the Snapdragon 845. And as their previous devices, this one might also get outrageous specs – 8GB of RAM and up to 256GB of internal storage. Comparing this to some of the current flagships like the Galaxy S9, we can see that OnePlus is going to keep up on their promise. Unfortunately, there is no information about the battery capacity on the image. But, Dash Charge is more than likely to stay, as it has been one of the key selling points for OnePlus.

For the cameras, we can only see that the rear setup will feature a 16MP + 20MP combo. There is no information on anything else, so we cannot judge based on this information only. But, judging from the 5T, we can expect a decent camera that takes excellent pictures. The second sensor might still be optimized for low-light environments, as the one on the 5T. But, OnePlus might even revert back to the telephoto one from the regular OnePlus 5, so we’d have to wait and see.

Software wise, we can see from the images that it will run Android Oreo 8.1, with OxygenOS on top of it. The skin is almost stock, with some extra features being added to it.

There is no release date yet, but if we look at the release date of the 5, we might expect it around June. For the price, the slides point out to a $750 for the 256GB model. This could be the most expensive device OnePlus made, but it remains to be seen.

So, what are your thoughts on the rumors about the OnePlus 6? Share them in the comments below.