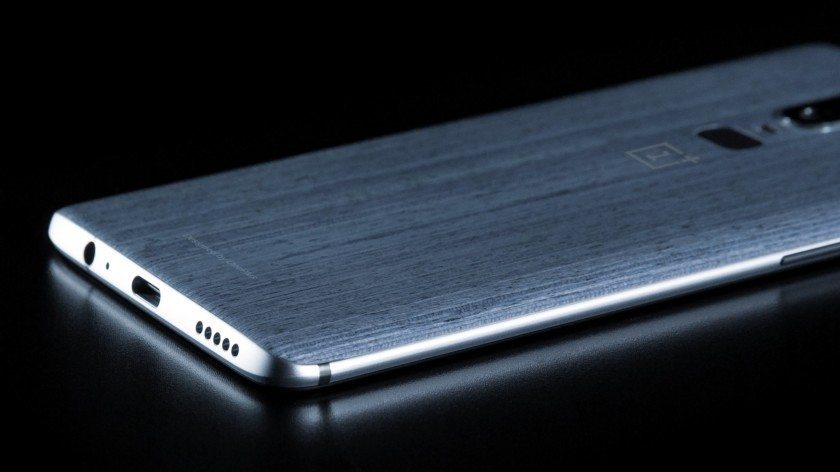 OnePlus is the company that revolutionized the term “flagship”. Many of the competitors are putting out devices with the best hardware, but a high price. OnePlus managed to put nearly the same internals and reduce the price. Often known as the value phone, the original OnePlus One was the device that made the company famous. Recently, they released the 5T, featuring a tall display and the best internals. Today, we have details about the upcoming OnePlus 6, and do they look juicy. Let’s take a look at them!

Starting with the design, we recently got a leaked image thanks to the famous Evan Blass. In it, we can notice few details about the upcoming flagship from OnePlus. First, the back has an interesting texture, something similar to wood. It could be a wood cover, as the company has before offered that option, or it could be something new. Looking at the elements that consist the back, you can probably notice a familiar look. OnePlus could have taken some design choices from the S9 Plus in the placement of the components. The dual camera setup is in the top middle, placed vertically. The oval-shaped fingerprint sensor is right under the camera, separated by the LED flash. From the image, we can see that the headphone jack is here to stay. It is accompanied by a USB Type-C and the single speaker on the bottom.

Rotating to the front, we know for sure that the OnePlus 6 is going to feature a notch. Carl Pei, the co-founder of OnePlus, is not worried that users will compare their device to a copy of the iPhone X. Instead, they’re moving towards the design aspect of it. He says that you’re basically shifting the notification bar top, giving you more real screen estate. They were mainly inspired by the Essential phone but going that small meant the cut on some important features. That’s why they opted in the middle. It will be bigger than the Essential one, but smaller than the one on the iPhone X. Unfortunately, the OnePlus 6 won’t reduce the chin, as it can be seen on the iPhone X. That is because of the ribbon connecting the display with the motherboard. And because of the limitations, the chin is going to stay for now.

On the inside, we should expect a pretty good package. And while there aren’t many details, we can expect for the device to be powerful. From the things that we do know, the Snapdragon 845 will make an appearance in the OnePlus 6. The powerful processor will be capable to handle any task you throw at it. It should pack in 8GB of RAM, which should satisfy any hardcore multitasker. Unfortunately, we don’t have any additional details about the other components such as the cameras or battery. Nevertheless, OnePlus never disappointed with their releases, and the OnePlus 6 shouldn’t be anything different.

We could see the OnePlus 6 earlier this year – in the period around late May/early June. For the price, it could be the first OnePlus device priced above $500.

So, what are your thoughts on the rumors and details about the OnePlus 6? Share them in the comments below.