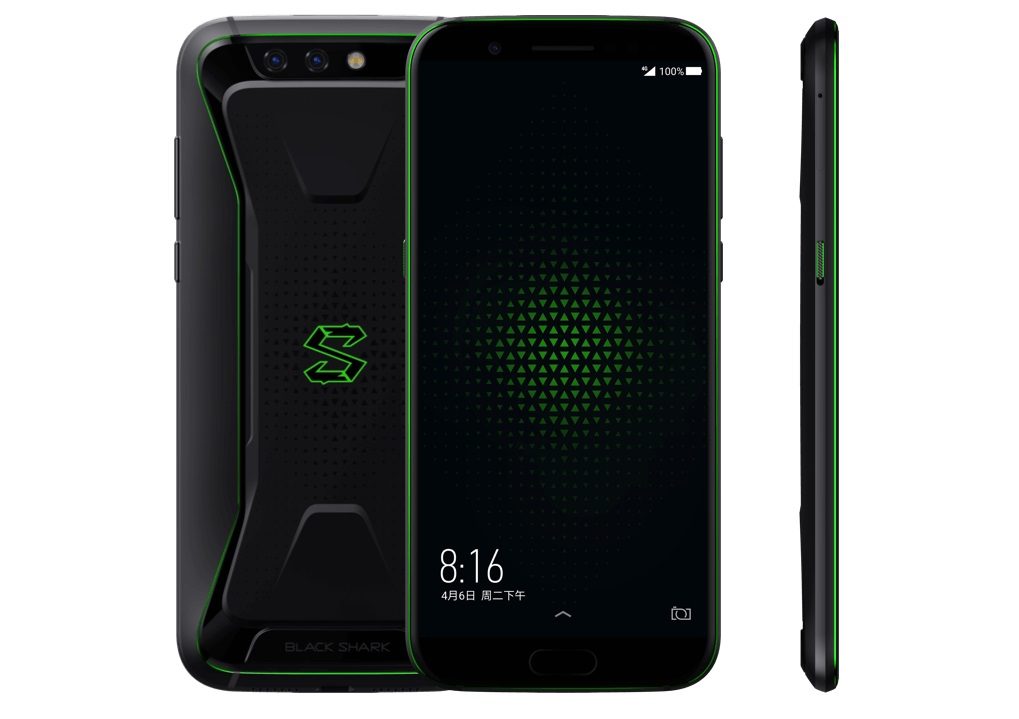 Xiaomi is slowly expanding itself outside of the Asian market. Now, you can almost easily buy official products from them in nearby stores. The others that are missing are still available through importing sites like AliExpress and GearBest. And that range of products is huge – smartphones, laptops, lambs, power banks, action cameras and more. Gaming equipment is also one of them, thanks to the Black Shark sub-brand. Now, they’ve released possibly the first competitor to the Razer Phone – the Xiaomi Black Shark smartphone! Let’s see all of the juicy details!

Starting with the design, you’ll see that the Xiaomi Black Shark has two sides. On the front, you will notice the subtle, tall display that gives the impression of a modern smartphone. It is filled with the 6”, 2.5D display with 2160 x 1080 resolution. Unfortunately, it’s not featuring 120HZ, as some rumors suggested. A single button / fingerprint sensor is sitting right under the display. Rotate it to the back, and you will see a totally opposite picture – sharp edges and looks like the phone has an armor. It’s a gamer smartphone, and we all know that gamers are rarely looking for sleek lines and glass designs. For the placement, the camera setup is in the top, with the Black Shark logo sitting proudly in the middle. The device is on the heavier side with the 190 grams of weight.

The other things gamers value are the internals. After all, it has to run heavy and graphic – intensive games. But don’t worry, the Xiaomi Black Shark has you covered. On the inside, you’re getting the best from the best. The Snapdragon 845 chipset should handle any task, with the Adreno 630 GPU running all of your games smoothly. Going on to the memory, you have two options: either with 6 or 8GB of RAM and 64 or 128GB of internal storage respectively. The choice you go for is depending mostly on your personal usage, but you won’t go wrong with either of them. Finishing with the battery, the device houses a 4000mAh one, a big battery that should last you through some long gaming sessions.

The camera is probably not an interesting part for a gamer, but for a premium device, you’re probably expecting quality. Well, the Xiaomi Black Shark has a 12MP + 20MP combo on the back with f/1.75 aperture and 6P lenses. They’re equipped with many features such as HDR, 4k capture, phase – detection autofocus and Portrait mode. On the front, you’ll get a 20MP shooter with f/2.2 aperture and 5P lens. We’d have to wait for samples to judge the camera’s quality accordingly, but from the specs, it’s probably going to be a good one.

On the software side, the device ships with Android Oreo 8.1. It’s probably going to feature a custom skin, but we don’t have that information yet. What we do know is that the phone will have a special mode that will boost performance in gaming. It can be activated through the “Shark key”, that can be found on the side of the device. Xiaomi is also going to offer a special one-sided gamepad, that can be used for 30 hours on a single charge.

The Xiaomi Black Shark will be available first in China, with more countries to come in the upcoming months. The price will start at $479 for the 6GB/64GB model and $559 for the 8GB/128GB model.

So, what are your thoughts on the Xiaomi Black Shark? Do you think it’s a better option than the Razer Phone? Share your opinions in the comments below.