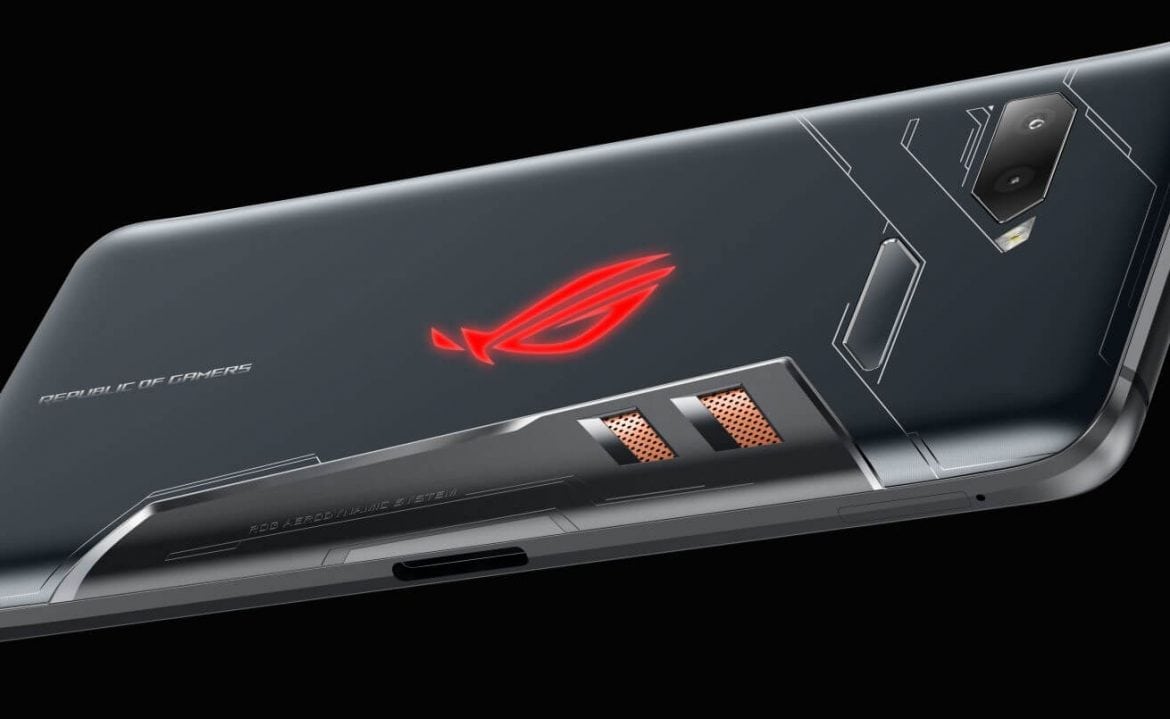 Gaming has been on a big rise recently, and the mobile industry is no stranger to that. We’ve already seen some tries from other companies regarding gaming. Some like OnePlus are making tweaks in the software to be better optimized when you’re gaming. Others are building fully fledged gaming smartphones. The Razer Phone is an example of that – a beefed up smartphone that was optimized for gaming. And now, ASUS wants to jump on the gaming train. Meet the ASUS Rog phone!

Starting with the design, you can see from miles away that this is a gaming phone. Part of it is sold by the bold curves and edges, while the other part is sold by the RGB logo on the back. It’s a look that is common across any gaming hardware, and it’s guaranteed to turn looks towards it. On the front, you will find the 6” AMOLED display with 2160 x 1080 resolution and HDR support. On the back, the regular package – a dual camera setup and the previously mentioned RGB logo. What’s different than other smartphones is found on the sides. Namely, aside from the main USB-C port on the bottom, there are two more merged into one on the side. In it, you can attach many of the accessories ASUS made for this device. What are those accessories? Read on.

Starting with the performance first, the ASUS ROG phone is probably one of the fastest smartphones available right now. Like most of the other flagship smartphones, the ROG also rocks the Snapdragon 845 processor. Unlike them, the one found here runs at 2.96GHz. That is possible thanks to a special redesign on the cooling system inside the device. With that, they had the opportunity to overclock it from the standard 2.7GHz. Aside from that, the device has 8GB of RAM and 128 or 512GB of internal storage. It has a dual 12MP + 8MP camera combo on the back and a single 8MP shooter on the front. And all of that is powered by the 4000mAh battery, which should last you through your long gaming sessions.

Returning to the accessories, ASUS will offer four different accessories that will be available for purchase aside from the device. The first one is a clip-on cooling fan, that should further on cool down your smartphone in those long gaming sessions. It also adds additional USB-C port and another headphone jack. The second one is a dock that will turn your smartphone into a PC, similar to the Samsung Dex. But this one is designed with gaming in mind, and with it, you’re getting a lot of ports to accompany it. One USB-C port, four USB-A ports, Ethernet, DisplayPort, HDMI, 3.5mm S/PDIF port and a 3.5mm microphone jack. This should take your gaming sessions to the next level.

Going on, the third one is a controller that attaches to your smartphone on the sides. You’re getting the standard package of buttons: dual analog sticks, four regular and four shoulder buttons and a D-pad. It’s made in collaboration with Gamevice, and they’re promising a special TV dock in the near future. Lastly, the TwinView Dock is a special clamshell controller with a screen on the bottom. That screen is also a 6” 2160 x 1080 AMOLED panel, and it is accompanied with two stereo speakers. The controller also features grips and shoulder buttons, as many others do. Finally, all of this is powered by the 6000mAh battery – a monster that should hold on through your long gaming sessions.

The ASUS ROG phone will be available for purchase this summer. Unfortunately, there are still no details about the price for now.

So, what are your thoughts on the ASUS ROG phone? Share them in the comments below.