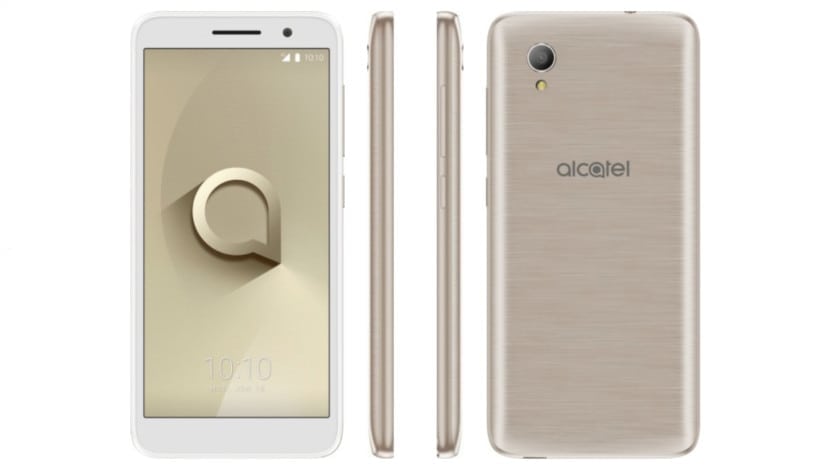 We’ve seen many different budget smartphones hitting the market recently. And most of them have decent performance for the price. But, compared to the features that are standard in 2018, most are missing out on them. The one trend that defined this year so far is the push towards bezel-less displays. Panels with 18:9 aspect ratio and more are common, and the push towards the 100% screen-to-body ratio continues. And now, we’re slowly seeing that push in the budget market as well. Alcatel is one of those companies that carry this with the recently announced Alcatel 1. Let’s see what’s in store for you!

Starting with the design, the Alcatel 1 is pretty much what you’d expect from a budget device. On the back, you’re getting a plastic finish that mimics the look of a polished metal. It has curved edges, so it’s easier to hold in the hand. On the front, as we mentioned before, you’re getting the tall, 18:9 aspect ratio display. The panel is 5 inches big with 980 x 480 resolution. The taller screen means for smaller bezels, which is always nice. There aren’t any capacitive buttons on the front – instead, they’re replaced for software ones. On the back, you will find the single camera shooter in the top corner, accompanied by the flash. The Alcatel logo completes the back look.

Moving on to the performance, again, don’t expect any miracles from this device. The Alcatel 1 is for those that want their device to simply work. For regular calls, texts and basic internet usage, this device is more than enough. Starting with the chipset, the device features the 1.3GHz quad-core MediaTek MT6793 processor. It is accompanied by 1GB of RAM and 8GB of internal storage. For basic usage, these numbers will be enough. Rounding up the internals, the 2000mAh battery should easily last you through a full day of use.

Switching over to the cameras, Alcatel placed a single 5MP shooter on the back and a single 2MP shooter on the front. Alcatel mentioned that these cameras will interpolate to 8MP and 5MP, respectively. With that, they should take better pictures and videos. And for the casual shot for social media or your personal collection, you don’t need anything better.

Finishing with the software, the Alcatel 1 will feature Android Go, based on Android Oreo 8.0, which is expected. The special tweaks and software made in the Go version will be running smoother compared to regular Android. However, Alcatel is known for stuffing their devices with a lot of bloatware to justify the lower price. The 1X was another example that also run Android Go, but because of the bloatware it was still running slow. Despite the fact that back then it was still running unfinished software, you should keep it in mind.

The Alcatel 1 will be available for purchase at some point in July, per their press release. The device will be priced at around 79 Euros.

So, what are your thoughts on the Alcatel 1? Share them in the comments below.