Microsoft goes after Apple’s latest 9.7-inch iPad with $399 and up Surface Go 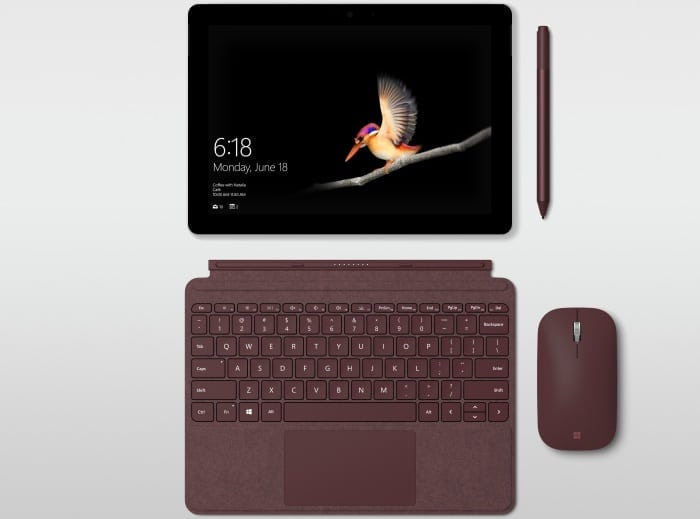 After reportedly abandoning yet another phone-related project in the mysterious “Andromeda”, Microsoft has shifted its focus back to the 2-in-1 computer category the Redmond-based tech giant helped establish a number of years ago.

But the Surface Go is somehow similar to and radically different from last year’s fifth-generation Surface Pro. The newly unveiled 10-incher certainly looks familiar, and largely does the same things as its jumbo-sized, more professional forerunner.

Instead of trying to be a laptop hidden in tablet’s clothing however, this thing is compact, portable and affordable first. Think of it as a successor to 2015’s non-Pro Surface 3, as well as Microsoft’s latest direct rival to Apple’s entry-level 9.7-inch iPad.

At 1.15 pounds and 8.3 mm thin, the Surface Go is obviously lighter and slimmer than the Surface Pro, but slightly bulkier compared to the newest non-Pro iPad. Powered by a 7th Generation Intel Pentium Gold Processor 4415Y, it’s predictably not as speedy as its pricier cousin, but at least it doesn’t pack an Atom chip.

Besides, the fanless Windows 10 tablet promises to stay quiet and cool for up to nine hours between charges, which is not bad at all. Clearly, Microsoft’s goal has been to balance power, performance and battery life for the “most critical tasks people perform every day”, and at least on paper, said balance looks pretty much unbeatable.

The same can probably be said about the $399 price point, although the 9.7-inch iPad technically starts even lower. If you want a Surface Pen with 4096 levels of pressure sensitivity, a new Signature Type Cover “custom-made” for Surface Go or a new Surface Mobile Mouse, you’ll also need to pay extra.

The entry-level configuration includes 4GB RAM and 64 gigs of internal storage space, while a $549 variant bumps the memory up to 8 gigs and the local digital hoarding room to 128GB. Pre-orders are underway today in “select countries”, and an LTE-enabled model is slated for a release “later this year.”