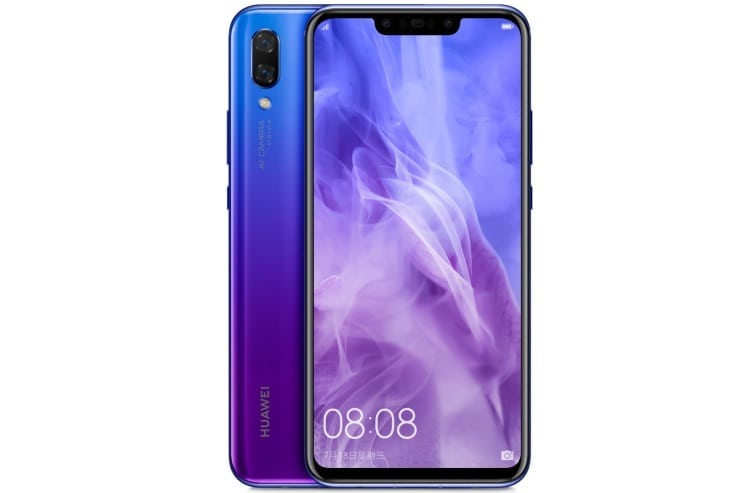 The Nova 3 confusingly comes after the Nova 3e, which is merely an alternate, regional name for the mid-range P20 Lite. Previously, all Nova-series devices could be characterized as mid-rangers, but the new guy packs the same exact high-end Kirin 970 SoC as the Huawei P20 and P20 Pro.

The advanced AI-leveraging chip is also paired with a hefty 6GB RAM and 128GB internal storage space, although the 3750mAh battery is actually smaller than the P20 Pro’s 4000mAh cell. That’s despite the fact the Huawei Nova 3 offers 0.2 inches of extra screen real estate, and it’s due to a slightly slimmer 7.3mm waist and reduced 166 grams weight.

With the fingerprint sensor moved to the back, the 6.3-incher manages to stay essentially as compact as the 6.1-inch P20 Pro, while marginally bumping up the display resolution to 2340 x 1080 pixels. That makes this an extra-tall 19.5:9 affair with an identical ppi density as the P20 Pro flagship.

Of course, the Nova 3 lacks Leica’s professional fine-tuning of its dual rear-facing cameras, which doesn’t make the 16 and 24MP shooters any less impressive. You also get a solid 24 + 2MP selfie combo, as well as EMUI 8.2-skinned Android 8.1 Oreo on the software side of things, various AI and AR tricks, including something called 3D Emoji, proprietary GPU Turbo technology, and of course, facial recognition support.

No official word on pricing yet, but clearly, the Huawei Nova 3 will cost significantly more than the Nova 3e, aka P20 Lite.