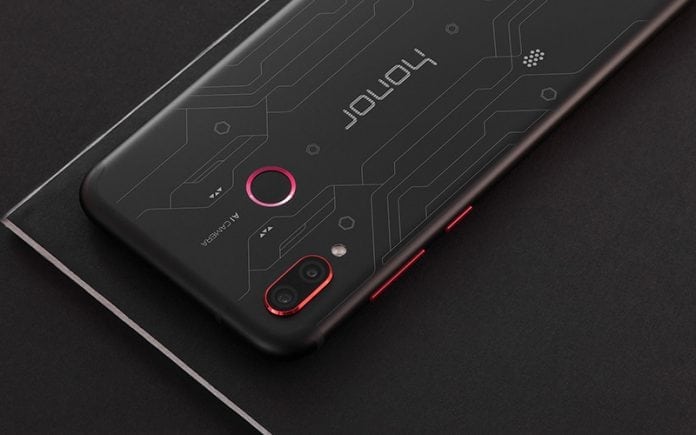 Honor has been making some pretty big moves in the budget and midrange market this year. We’ve seen many great devices from them, with the View 10 being the most notable. However, they have no intentions to stop there, as they’re currently eyeing on the gaming market. Following the Razer phone and the ASUS ROG one, now Honor wants a piece of that cake. Their catch is that they’re still committed to the lower prices against other competitors. And for the price asked, this Honor Play will for sure win the pockets of many different customers. Let’s see what this device can do!

Starting with the design, you’re probably expecting a different design with many RGB lights and fan vents. Well, you’re wrong – in fact, the Honor Play is looking just like any other regular smartphone. On the front, you will find the 6.3” IPS LCD display. It’s capped at 2340 x 1080 resolution and 19.5:9 aspect ratio. There is a notch on the top, where the front camera and earpiece speakers are placed. The Honor logo is sitting proudly on the bottom chin. Rotating to the back, you will find the camera setup in the top corner, with the fingerprint sensor in the middle. There will be many different color options to choose from, with the player edition red/black being my personal favorite.

The only place where this smartphone screams gaming is on the inside. The Honor Play is featuring some of the best internals available right now. Starting with the chipset, the device is running on the Kirin 970 processor. This same chip is found on the Huawei P20 Pro and the Mate 10 Pro. Furthermore, it is accompanied by the Mali-G72 GPU, which is furthermore enhanced with Huawei’s GPU Turbo feature. They claim that GPU Turbo will enhance the GPU’s efficiency up to 60 percent. Moving over to the memory, you’ll have the option for 4 or 6GB of RAM. Furthermore, the internal storage starts at 64GB, and it can be upgraded with a MicroSD card. Rounding up the internals, the device is powered by a 3750mAh battery. It should easily last you through those long gaming sessions.

Jumping over to the cameras, the Honor Play features a dual setup on the back, with a single shooter on the front. On the rear, you will find the primary 16MP shooter with f/2.2 aperture. Right next to it is the 2MP secondary shooter with f/2.4 aperture. Pictures coming out of these sensors are great, with decent color saturation and dynamic range. Move over to low light conditions, and you’ll find a lot of noise in them. Rotating to front, the 16MP front shooter should be more than enough for all of your selfies.

Finishing with the software, the Honor Play is running on Android Oreo 8.1, with Huawei’s EMUI 8.2 skin on top of it. The design is taking a lot of inspiration from iOS, so it could be a deal breaker for some. However, it is packing a lot of useful features, including some that are exclusive to this device.

The Honor Play is available for purchase through Amazon and the official Honor store. Prices start at $300.

So, what are your thoughts on the Honor Play? Share them in the comments below.

One thought on “Honor Play released!”