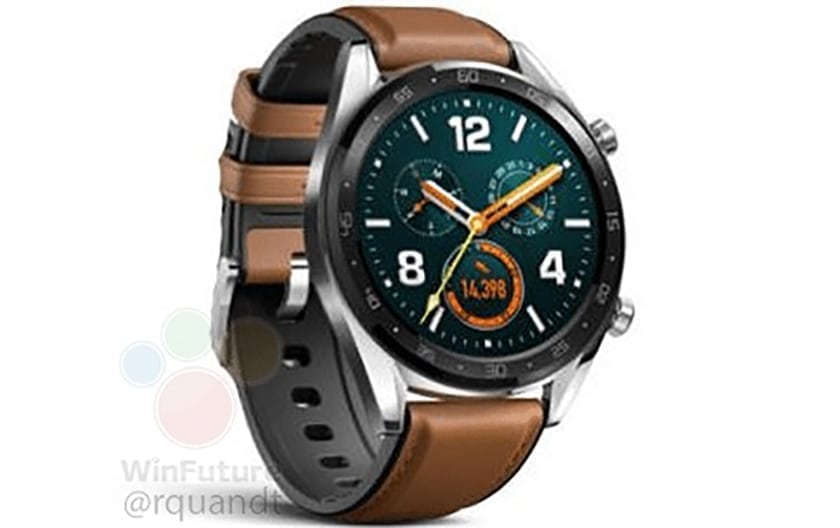 The smartwatch scene got quite in the news recently. At the annual Apple event, the company announced the next generation in the smartwatch series, the Apple Watch Series 4. On the other side, there are a lot of new things. Google announced the latest software upgrade to their Wear OS, making it more intuitive and easier to use. Qualcomm announced the Snapdragon Wear 3100, a special chipset designed for use in smartwatches and Wear OS. Samsung also announced the new Galaxy Watch back at their Note event in August, so the competition is stiffening. Huawei might be upgrading their watch too, and WinFuture caught a glimpse of what might be coming. Named as the Huawei Watch GT, let’s take a look at the leaks!

As you can see on the picture, the Huawei Watch GT does look good. There could be two different version of it – the one pictured is the Classic or Fashion model, and the other being a Sport model. This one is looking pretty good, and if it’s not extremely big, you won’t know that it is a smartwatch. The band looks to be made of leather, and we’re expecting different options and colors to choose from. That will be especially true for the Sport model, since we’re expecting plastic bands there.

There are no confirmed details about the internals of this watch, but rumors suggest of some. Starting with the chipset, it is possible for the new Snapdragon Wear 3100 to make an appearance here. This chipset is using an additional low-power processor that is always on, running alongside the main chip. Whenever you’re not using the watch actively, it will shut down the main chip and run on the low-power one. With that, you’re getting the basic functionality of a watch, while greatly increasing the battery life. Qualcomm is declaring up to one – week of increased battery life, which is impressive for the current state of Wear OS watches.

Accompanying this new chipset could be the large 420mAh battery. This could be the main selling point of the Huawei Watch GT compared to other competitors. The new chipset will also confirm that this could be one of the first watches to ship with Wear OS 2.1. The new upgrade to Google’s OS brings a lot of new features and improvements that are long asked for.

Alongside all of this, the Watch GT could also feature a 1.39” AMOLED display. The AMOLED panel is definitely needed for the ambient display. Furthermore, GPS and NFC could make an appearance on all models as standard. The watch will come with 4GB of internal storage.

The Huawei Watch GT will most likely be announced on October 16th. Huawei scheduled that date for the launch of the upcoming Mate 20 and Mate 20 Pro, alongside other devices. Unfortunately, there aren’t any rumors on pricing yet.

So, what are your thoughts on the rumors and leaks behind the Huawei Watch GT? Share them in the comments below.