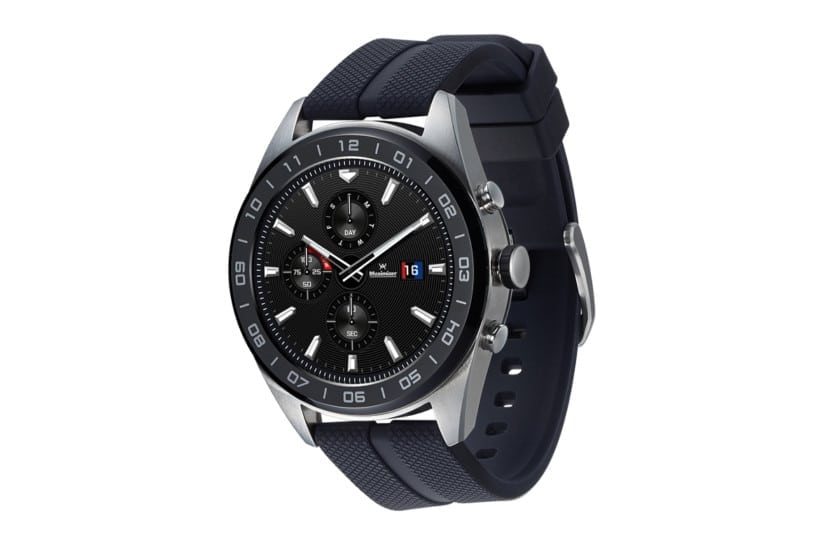 The smartwatch world was at a stale for a long time, especially on the Android side of things. For Apple fans, the company delivers nearly every year with an upgrade to the Apple watch. The most recent one, the Apple Watch Series 4 has a lot of quality of life improvements, alongside a bunch of new features. For Android users, things got interesting in the last few months. Qualcomm announced their new Snapdragon Wear 3100 processor for smartwatches, while Google updated Wear OS to 2.1. We got few new devices, and now, LG is the next to introduce one. Announced alongside the LG V40, the company announced the LG Watch W7. Let’s take a closer look at it!

Starting with the design, the Watch W7 is definitely targeted towards premium users. The classy design sells a lot of this mindset, with the black leather band and rounded face. The most interesting part though is the mechanical hands this watch features. With this, you can use the device as a regular watch if you don’t need the smart capabilities. Furthermore, when the device runs out of juice, the hands will continue to work up to two to three days. It’s an interesting concept, but the downside is that it cuts through the display. However, we’re not expecting to be obtrusive that much, since this is a watch, and you won’t spend much time looking at it. Speaking of the display, the W7 comes with a 1.2” LCD display. Unfortunately, the glass isn’t sapphire, but the panel has decent brightness in direct sunlight.

Going inside, alongside the mechanical part that runs the hands, the W7 is mostly disappointing. It runs on the old Snapdragon Wear 2100 and not on the newer 3100, which extends battery and stand-by time. Speaking of the battery, it’s capped at 240mAh, which is pretty low compared to other smartwatches. The reason for that could be the mechanical part that takes place inside the device. Furthermore, the device has 768MB RAM and 4GB of internal storage. It has Bluetooth 4.2, while the device charges through the USB Type-C port.

However, there are a lot of other features that are missing, compared to other competitors. The LG Watch W7 isn’t a replacement for your fitness tracking, since it lacks a heart rate sensor. It doesn’t include a GPS sensor either, one of the best reasons for a smartwatch. LTE support is also missing, as well as the one feature that most use – NFC. With that out of the box, you cannot use Android Pay to do your contactless payments. That alone will be the biggest deal breaker for many users. And for the price this device is sold for, there are many other competitors that offer all of these missing features. They probably won’t include mechanical hands, but are they that much important?

The LG Watch W7 will be available for purchase on October 14th, first through Best Buy. Other markets will follow up in the upcoming months. The W7 is priced at $450.

So, what are your thoughts on the LG Watch W7? Share them in the comments below.