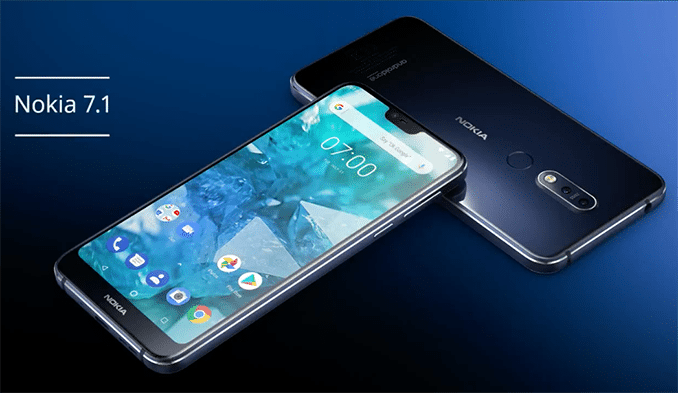 Nokia definitely delivered on their comeback in the past two years. They released a bunch of new smartphones that offer great specs, solid design and pure Android. And all of that for a price that is slightly lower than those of their competitors. And this success is not just on word – Nokia is in the top ten manufacturers globally and the top five in 25 different markets. In Europe alone, it came to the number five spot. And they have no intents to stop there. That’s why they’re continuing to release new devices and smartphones. And yesterday, they announced the successor to the famous Nokia 7 Plus – the Nokia 7.1. Let’s take a closer look at it!

Starting with the design, the device definitely looks like a premium device. The glass back definitely feels good in the hand, but the colors make this device pop out. The small accents of copper around the edges and some curves makes this device stand out from all the other. On the front, you have a 5.84” IPS LCD display with 1080 x 2280 resolution and 19:9 aspect ratio. It does feature a notch, but it’s on the smaller side. However, the bottom chin is quite big, and it’s probably the biggest downside of this device. But, you’ll probably forget about it the moment you start using the device. Rotating to the back, the camera setup is in the middle part of the top, with the fingerprint sensor right under them. The frame is cut from a single block of aluminum, a practice that is applied to most of Nokia’s devices.

Going inside the Nokia 7.1, you can clearly see that it’s a midrange device. Starting with the chipset, the phone features the Snapdragon 636 processor. This chipset is accompanied by the Adreno 509 GPU, and they will handle any task you throw at them. Going over to the memory, the 7.1 comes in two different options – one with 3GB of RAM and 32GB of storage and the other with 4GB RAM and 64GB of storage. We recommend the 4/64GB version, but both options are fine. Finishing the internals, the device comes with a 3060mAh battery. It should last you through a day of use, and it has Quick Charge on board in case you need to top up quickly.

Jumping over to the cameras, the device comes with a dual camera setup on the back and a single shooter on the front. Starting with the back, you have a main 12MP shooter with f/1.8 aperture and a secondary 5MP depth sensor with f/2.4 aperture. The lenses are branded from Zeiss, and the pictures coming out of them are excellent. On the front, you have a single 8MP shooter with f/2.0 aperture. For all of your selfies or video calls, its more than enough. Speaking of video, the device can shoot up to 2160p at 30 frames per second. Electronic image stabilization is present, but only for 1080p recordings.

Finishing with the software, as all other Nokia devices, the 7.1 also comes as part of Android One. Which means stock, pure Android Oreo 8.1 with guaranteed updates up to three years.

The Nokia 7.1 goes up for pre-order on October 5th and it will start shipping on October 28th. In November it will be available for pick up directly in stores. The device will be priced around 340 euros.

So, what are your thoughts on the Nokia 7.1? Share them in the comments below.