Some more stuff today for all the Google Nexus One hungry out there, this time we have a Nexus One Android 2.1 interface video along with a couple of comparison images of the Nexus One side by side with the iPhone and HTC Hero.

The comparison pictures are a tad blurred but at least gives a general idea of the size of the Nexus One when compared with the iPhone and HTC Hero, while the video lasts just over five minutes and can be viewed below courtesy of the guys over at engadget. 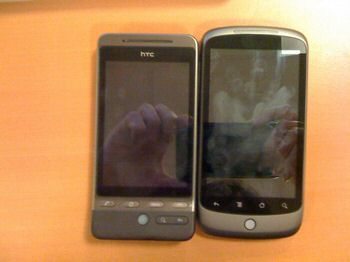 The Nexus One Android 2.1 interface walkthrough is again a tad shaky and like most Nexus One videos so far comes without commentary, but it does show a reasonable rundown of all the menus.

And that’s about it, not much more one can say, so I’ll just let you hit up that Nexus One video so you can see for yourselves…enjoy.