Arachnophobia Inducing Spiderpodium for your iPhone?

Now here we have an interesting gadget holder which unfortunately for some if not many will send chills of fear down their spine as it takes on the form of one of the most wildly spread phobias…that eight legged beast known as a spider.

According to the article over on gizmodo, all eight legs of the Spiderpodium are flexible and are shaped just like the fear inflicting creepy crawlies, and can be attached to virtually anything. So would make a good stand for your iPhone if you can stand having it in your house.

The eight legged beast will hold your iPhone or other gadget firmly in place while you lay back and watch your favourite movie on your iPhone, perhaps Arachnophobia, Eight Legged Freaks, or maybe Tarantula? 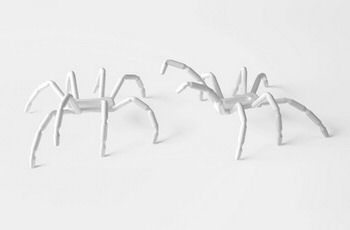 In any case I would say that most who own an iPhone or other smartphone and want a gadget holder would probably give Spiderpodium a bit of a wide birth, I know I will, but if you can stand having one around it will be available in the US on the 29th of March costing $23.