Well now that we’ve seen the Apple iPad 2 become available in white, one would presume that Apple has overcome their problems making white gear, which should mean that finally Apple will be able to make good on their promise of the white iPhone 4.

And according to an article over on Engadget it would appear that Apple’s senior vide president of global product marketing, Mr. Phil Schiller, is in agreement and has apparently tweeted so…

Twitter user @stefanetienne picked up on a tweet where someone asked… “how do I get a white iPhone” and in reply Schiller tweeted back… “Hi Eric. The white iPhone will be available this spring (and it is a beauty!).”

This tweet kind of put the confirmation stamp on a report that hit the net a few days ago, which claimed that the white Apple iPhone 4 is expected to ship sometime in April, which you can read (here).

Thus it would appear that the white iPhone 4, a product that has seen more delay and coverage than surprisingly the HTC Thunderbolt, looks as it may hit springtime, just when in springtime remains a mystery, but one could say that Schiller has confirmed the device will eventually end up in the public’s hands. 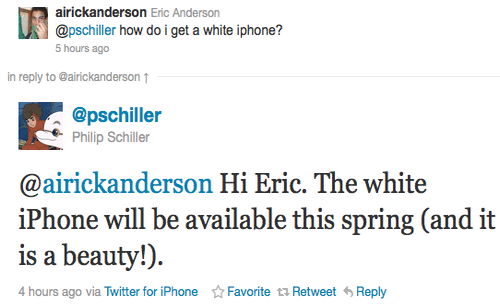