Apparently yet another render of the supposed next generation Apple iPhone has popped up on the net waves, highlighting basically what we have already heard as rumoured to be on the iPhone 5, but hey, iPhone 5 rumours are what the mobile space is made of right?

According to an article over on Electric Pig and by way of Concept-phones, French website Nowhereelse.fr, has posted the iPhone 5 render along with previously touted specs for the iOS smartphone.

Those specs are the usual larger display, a better camera and the lack of a home button, but whether any of that will become a reality is yet to be seen, but hopefully we’ll find out in June when Apple hosts WWDC 2011.

The Concept-phones guys say that the better iPhone 5 camera is likely to be a Sony Exmor R 8 megapixel snapper along with a 4-inch touch screen, but as I said earlier, all this is just pure speculation at the moment.

As for the release of the iPhone 5, well that seems to be still up in the air with a recent report by my colleague Lawrence posting that the iPhone 5 release could possibly be delayed until August or September.

So I figure the biggest question surrounding the iPhone 5 isn’t what the device may offer but when will Apple unveil it? 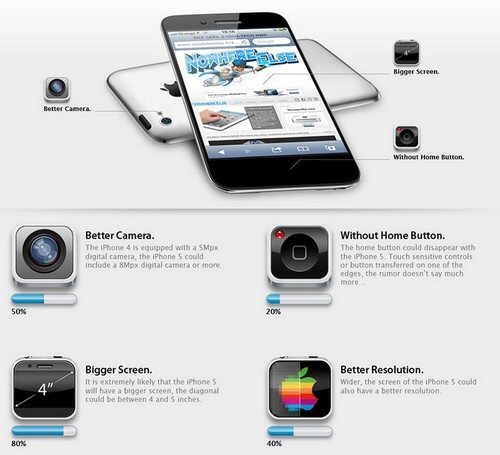