For those of you that have been waiting patiently for the next big Droid smartphone to release, news is that the Droid Bionic from Motorola is being prepared for a release and that it may come with a more aesthetically pleasing form factor.

The Droid Bionic was initially unveiled at CES 2011 earlier this year and received some negative feedback. However, it would appear that Motorola has taken this feedback onboard and have decided to make some enhancements to the device.

Now according to a screen shot coming to us from Droid-Life by way of Ubergizmo, it would appear that the Motorola’s Droid Bionic LTE smartphone will be undergoing a number of changes, among them is “an improved form factor”. The other enhancements to the smartphone mentioned in the screen shot are “expanded features and functionality”, all to make this an even better consumer experience. 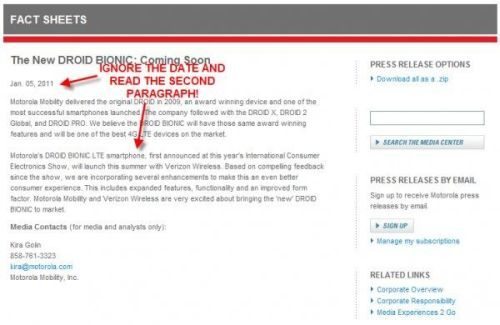 We did an article yesterday on the ‘Droid Bionic Being Purged from Motorola Website’ — see full article here. However, this screen shot appears to confirm that the device with it enhancements will be making an appearance this summer.

So now, all we need do is sit back and wait to see the emergence of the Motorola Droid Bionic released on Verizon Wireless later this summer and let us hope that there are no delays, like those that we experienced with the Droid Charge, and any outage issues will have been resolved by Verizon. Please give us your thoughts on the new enhancements to the Motorola Droid Bionic below.