Old LG seems to be expanding their Optimus range of devices rather quickly these days, as yesterday LG unveiled the LG Optimus Q2, and now it appears yet another Optimus smartphone has been snapped on camera, a device for Korea known as the LG Optimus LTE, LG’s first LTE enabled handset.

According to an article over on Slash Gear by way of Korean website Daum, the LG Optimus LTE is apparently the first smartphone in the world to sport a AH-IPS LCD on a 4.5-inch touch screen with a resolution of 1280 x 720.

Apparently the Android smartphone will be released on Korean carrier U+ as the LG Optimus LTE, however the device will continue to be known by its model number, LG LU6200 until another handle can be confirmed for a worldwide release, so it would appear the device will come to play elsewhere as well.

The LG Optimus LTE along with that touch screen will pack a 1.5GHz dual core processor, an 8 megapixel camera, WiFi, MHL, DNLA, and the runs Android 2.3.5 Gingerbread operating system, and as far as I can make out from the Google translation, will be upgradeable to Android Ice Cream Sandwich as a later date.

Apparently the LG Optimus LTE packs an 1830mAh battery, which is on par with the likes of the Samsung Galaxy S II, and features a somewhat unique back cover with a type of chequered grid effect using differing shades. 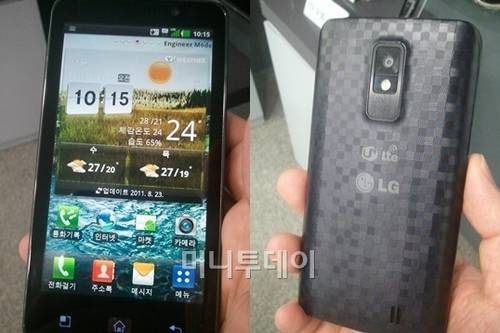