Another teaser has come out ahead of MWC 2012 and this upcoming smartphone certainly looks promising. It’s the LG Optimus LTE Tag and its name stems from a revolutionary new NFC innovation, LG Tag+. We’ll give you the rundown of what we know so far.

We’ve already heard about the LG Optimus Vu this week, set to rival the Samsung Galaxy Note and coming with LTE connectivity and NFC support. The Optimus LTE Tag, as its name suggests, also comes with LTE capability and again features NFC (near-field communciaon). NFC has really started to take off since Google Wallet came along and LG Tag+ is a unique feature that uses NFC in a truly groundbreaking way.

For instance LG Tag+ can change a phone’s settings automatically, simply by communicating with special ‘tags,’ or stickers. An example of the benefits of this, as suggested here, could be swiping a tag when entering an office that might put the phone into silent mode or initiate Wi-Fi. It’s clever stuff that could offer innumerable possibilities and is a key feature of this upcoming LG smartphone. LG President and CEO Dr. Jong-seok Park explained, “The Optimus LTE Tag isn’t just a cosmetically-enhanced version of Optimus LTE, it offers a truly innovative feature which we think really makes a smartphone smarter.”

Other specs and features include a 1.2GHz dual-core processor, 4.3-inch IPS display with resolution of 800×480, 16GB of eMMC memory, 5-megapixel rear camera and 1.3-megapixel front-facing shooter. There’s also an MHL output, DLNA support and a 1700mAh battery and it all runs on Android 2.3 Gingerbread. It’s a shame it’s not 4.0 ICS but we imagine an update to the later operating system will be offered at some point. Also it does seem slightly odd that the display is so lacking, with only an 800×480 resolution as mentioned here.

We don’t yet know of a release date or price for the LG Optimus LTE Tag but you can be sure we’ll let you know if we hear more from Barcelona soon. It will likely release first in Korea and may come to other regions later. What are your views on the revolutionary new LG Tag+ development? Can you imagine a myriad of uses for this sticker or ‘tag’ system? 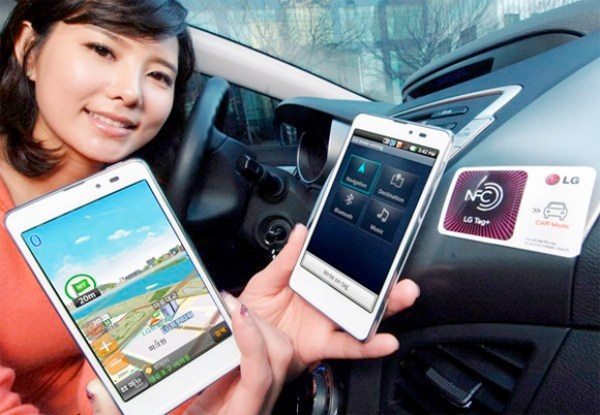