We’ve all been getting very excited about the launch of the upcoming iPad 3 and expected an Apple event to unveil it on March 7. However expecting and knowing for sure are two different things but news today is that this is now official as Apple has now sent out invitations for the big hurrah! It seems that we’ll soon be hearing at last what the specs, features, price and release date for the iPad 3 really are.

This is great news for the many people who’ve been waiting to get their hands on the iPad 3 tablet as we think it may not be too long after the big reveal that the release comes, indeed it seems as though stories that shipments were already heading to the U.S. were accurate. There’s only just over a week to go then until next Wednesday when all eyes will be on the event. The event will be held at the Yerba Buena Center for the Arts in San Francisco, a venue that Apple often favors, and it will begin at 10am PT, that’s 1pm ET.

Earlier today rumors were spreading that the event would be held in New York but this news has certainly put paid to that idea. Apart from the venue and times, the only words on the invitation are, “We have something you really need to see. And touch.” Those words are shown against a backdrop of an iPad just to remove any doubt whatsoever as to what will be introduced. Of course the usual probing into what every word on the invitation may mean has already started.

One suggestion from Mashable is that the words “you really need to see” with the emphasis on the ‘see’ might mean that the iPad 3 will have the Retina Display so widely rumored. Of course there are also the words “And touch,” and it’s anybody’s guess as to what that might mean. It doesn’t seem that this could refer to other expected additions such as the improved camera, A6 or A5X processor or possible LTE connectivity so we’re still pondering on that one. Maybe you have some ideas?

We shall certainly be eagerly waiting for next Wednesday March 7 to find out all the details for the Apple iPad 3 and will be bringing all the news to our readers so be sure to check back with us for more then. In the meantime we’d like to hear if you will be in line for the iPad 3? How much would you be willing to pay for the next-generation tablet from Apple? 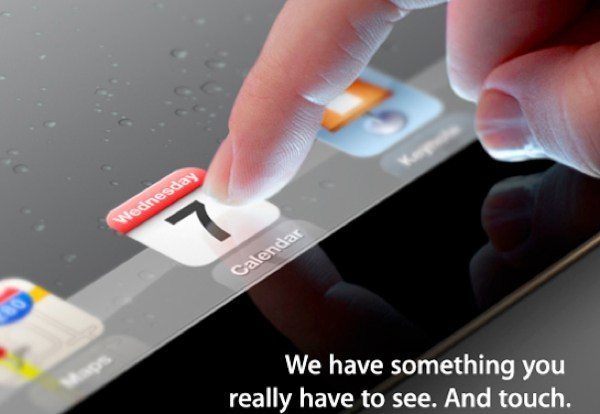