We enjoy bringing our readers all the latest news about smartphones and every now and then something a little different comes along. That’s the case today as we have news on a new rugged Android smartphone, the Caterpillar CAT B10, suitable for use on any construction site or elsewhere that you may need a tough device.

The CAT B10 has an 800MHz single-core processor, 3.2-inch display, 5-megapixel rear camera and also a front-facing camera. It will be running on Android 2.3.5 Gingerbread with an update to Android 4.0 Ice Cream Sandwich down the line. The specs and features then aren’t exactly thrilling but the people who need a rugged phone like this will be more interested in how it stands up to knocks, bumps and who knows what else! The CAT B10 is around an inch thick and has a rubberized casing capable of enduring dust, water and scratches. The phone carries the industry-standard IP67 certification as evidence of this.

Other claims from Caterpillar are that the CAT B10 can withstand being underwater to a depth of 1 meter, and not just for a quick dip either as it can hold out for 30 minutes of being submerged, according to Android Authority. We’ve already seen waterproofing becoming more apparent on recent phones with one example being the Panasonic Eluga Power and there are even reports it may be coming to the iPhone 5 and Samsung Galaxy S3.

The CAT B10 is due for a global release in May with an anticipated price of â‚¬379 (around $500) off-contract. The Verge managed to get a hands-on experience with the Caterpillar CAT B10 and noted its water resistance under a stream of water although didn’t get to submerge it completely. During the course of the hands-on the device was actually dropped accidentally onto the hard floor and it came up trumps and also endured some further bashing without a mark, so it certainly lives up to its description as a ‘rugged’ phone.

You can also see a video hands-on of the Caterpillar CAT B10 below this story. Do you require a rugged smartphone and if so, what do you think of the CAT B10? 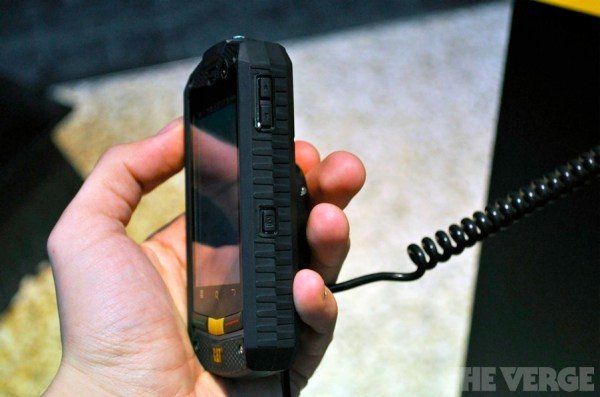 4 thoughts on “The Caterpillar CAT B10 bulldozing Android smartphone”