If you’re a fan of mobile gaming then there’s some interesting news today as PowerA, a company that specializes in console gaming system controllers and accessories, have come up with its first controller for mobile use. The PowerA MOGA Bluetooth controller is for Android devices and will be released in time for he holiday season.

The MOGA controller has a black plastic finish to the front but the rear is not only in rubber but also ribbed to give even more grip. It has dual analog sticks, shoulder buttons and the center cleverly holds phones of various shapes and sizes with the use of a fold-out and spring-loaded portion. The MOGA experience will also be enhanced with an app, the MOGA Pivot app. This will be free from the Google Play store.

Engadget managed to get some hands-on time with the MOGA and found it to be solidly built with good grip and comfortable feel in the hands and it had no trouble holding a Galaxy S2 in position. The controller worked well for gaming although a shorter throw than satisfactory from the MOGA buttons was noted, resulting in a clicky and hollow feeling when used. Ultimately it was described as a “good option for folks looking for some tactile controls to use while gaming on their phones.”

While we know the MOGA for Android is coming, PowerA also plans to bring an iOS and also Windows Phone version to the market at some point. The MOGA Bluetooth controller for Android will hit the shelves in time for the holiday season and there will also be a MOGA Pro, a larger version. There is no pricing available yet but we reckon a lot of people who now use their mobile devices for gaming will appreciate the MOGA controller.

Are you interested in the MOGA controller for Android? Is this something you’ll be adding to your holiday wish list? Let us know with your comments. 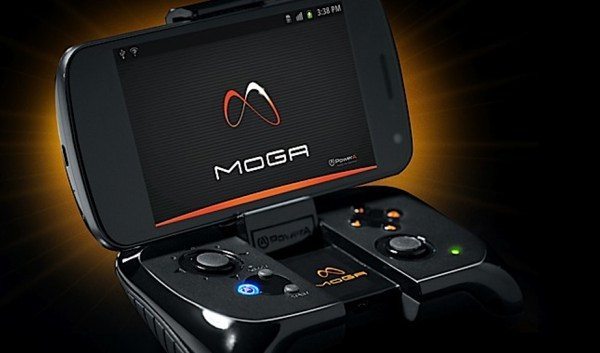